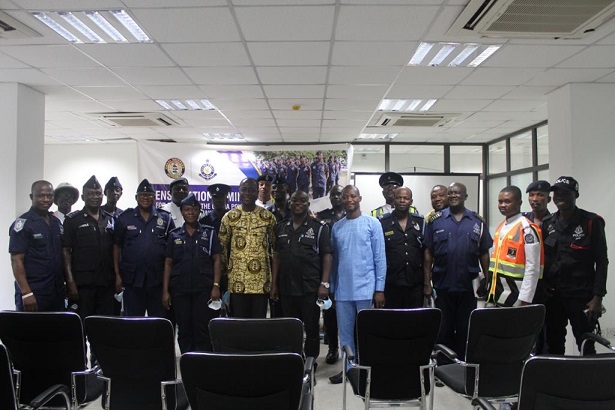 The Chief Executive Officer of the Ghana Shippers’ Authority (GSA), Ms. Benonita Bismarck has lauded the police service for its commitment to addressing road governance challenges in the promotion of transit trade.

She said under the able leadership of the Inspector General of Police (IGP), Mr. James Oppong-Boanuh, the GSA is enjoying good collaboration with the police service in addressing bottlenecks relating to its operations impeding the smooth passage of transit trucks along Ghana’s transit corridors.

These were said on her behalf by the Head of Freight and Logistics of the GSA, Mr. Fred Asiedu-Dartey on 11th November, 2020 in Kumasi during the first in a series of a sensitisation workshop organised by the GSA to sensitise senior police officers on the importance of the transit trade. The event also sought to address key concerns relating to the conduct of police officers deployed along the corridors.

He expressed the police service’s commitment to discipline officers found frustrating and harassing transit truck drivers through extortion of monies and other unhealthy practices leading to avoidable delays and associated costs.

In a welcome address, the Kumasi Branch Manager of the GSA, Mr. Isaac Tersiah, underscored the need to remove trade barriers along the country’s corridors as part of Ghana’s obligation in facilitating trade with the landlocked countries of Burkina Faso, Mali and Niger.

Resource persons from the GSA and the Ghana Police Service made presentations on an evaluation of the contribution of transit trade through Ghana’s corridors and the role of the police in facilitating transit trade, respectively.
A total of 30 senior police officers, including all divisional heads in the Ashanti Region attended the sensitisation workshop.