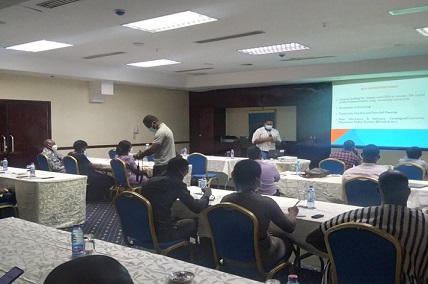 After seven years of supporting citizens to monitor capital projects in 100 districts across the country, Ghana’s Strengthening Accountability Mechanisms (GSAM) Activity is now focusing on service delivery monitoring at the local level in 50 districts.

The first and second phases of the project, which sought to strengthen citizens’ oversight of capital development projects were implemented between 2014 and 2020 but were extended for 18 more months with an additional component of monitoring service delivery in basic schools and CHPS compounds as well as Water and Sanitation (WATSAN) facilities already monitored under the project.

Funded by the United States Agency for International Development (USAID), the project also aimed at improving accountability, transparency and performance at the local government level.

It is being implemented by a consortium led by Care International in Ghana, and the Integrated Social Development Centre (ISODEC) in collaboration with 25 Civil Society Organisations (CSOs) and other local and national stakeholders.

As part of the extension in 50 districts, the consortium has organised a training workshop for focal persons in beneficiary districts to build their capacities on the required service delivery standards.
Participants were drawn from local CSOs implementing the project and Planning Officers of the District Assemblies.

Resource persons from the Regional Health Directorate, Ghana Education Service and the Regional Coordinating Council were on hand to train the participants on the standard of service delivery education, health and WATSAN in GSAM’s operational Districts and Municipalities.

The idea was to equip participants with the requisite information to enable them to serve as resource persons for upcoming training of Community Development Monitors in the 50 GSAM Districts.

Mr. Samuel Boateng, the Deputy Chief of Party of the GSAM Activity, said the new phase of the project comes with an additional component of monitoring service delivery in facilities that the project monitored during the first two phases.
He said the expectation was that the participants would be equipped to empower citizens to be abreast with the standards required of the kind of services delivered in the selected facilities.

“If citizens are going to monitor to see the service delivery in a certain CHPS Compound, then, that citizen would have to know what a standard CHPS Compound should be”, he pointed out.

He reminded the participants not to do the monitoring based on emotions and perceptions, but go by the standards put in place by the required institutions.

She said the project had also improved the responsiveness and performance of District Assemblies in capital project delivery, disclosing that 54 per cent of citizens surveyed in 2020 indicated that their concerns on capital project implementation had been addressed by the assemblies.