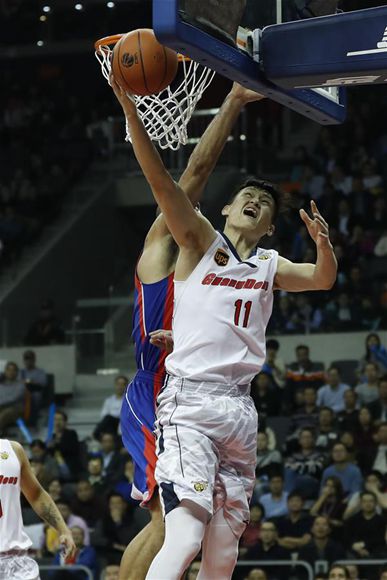 Guangdong’s Zhou Peng goes up for a basket in the game.

Yi Jianlian got 28 points and 14 rebounds, leading Guangdong to beat Tianjin 114-103 for the seventh consecutive win in the 12th round of the 2016-2017 Chinese Basketball Association (CBA) league regular season action on Wednesday.

Tianjin hired a new coach just before the match, which had a bad influence on performance. Guangdong started the game with a 10-4 lead. Tianjin neared the gap in second quarter with a 10-0 lead, and Tianjin only fell behind with 3 points in midway of the game.

Yi Jianlian led the team to keep their advantage in the next half, and finally won the game. Donald Sloan led Guangdong with a team-high 32 points and 13 assists. Pooh Jeter of Tianjin hit a game-high 36 points and 7 assists.

China and Africa in communication on situation in Guangdong