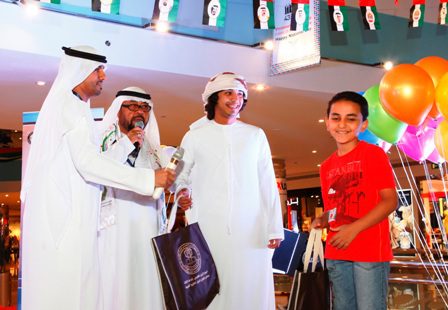 The Gulf Cooperation Council (GCC) Inmates Week organized under the theme of ?Lead me to a Better Future? concluded its activities in Abu Dhabi. The closing ceremony took place at Mushrif mall and included recreational activities, as well as national, educational and cultural competitions, presented by media figure Jassem Obeid Al Zaabi from the Community Police and Abdullah Al Mahri from Al Mafraq Juveniles Center. The activities witnessed significant interaction from the visitors; and winners in the competitions received valuable gifts from the Traffic and Patrols Department; the Law Respect Culture Bureau; Al Faraj Relief Fund; the Community Police; the National Rehabilitation Center (NRC); the Vocational Education Development Center (VEDC); the Medical Services Department; and the Family Development Foundation (FDF). Moreover, the Security Inspection Department (K9) also presented a police dog show that was highly acclaimed by the attending children and their parents. The Ministry of Culture and National Heritage organized a national and cultural contest; while the Emergency and Safety Department participated with a lecture and a cultural competition aimed at raising health awareness among the public.

The Law Respect Culture Bureau also took part in the closing day activities with a competition on the importance of complying with the law, not out of fear of punishment or legal penalty, but out of keenness to boost security and stability of community, and support the role of law in regulating the social and professional aspects of life. Representatives of the Law Respect Culture Bureau offered valuable prizes to the public.

For their part, representatives of the Faraj Relief Fund explained the role of the Fund in providing the financial contributions to ensure the release of inmates and sponsor and support their families while they are serving their sentence, saying that, ?Any horse may stumble, any sage may err; prison is not the end of life , it should be regarded as a reform school, which provides care for the inmates and properly rehabilitates them both behaviorally and professionally so that they are able to return to their communities as good citizens who serve their families and societies.?

The National Rehabilitation Center (NRC) presented a documentary film highlighting the role of the centre, which was established upon the insightful directives of the late Sheikh Zayed bin Sultan Al Nahyan ?May God rest his soul?. It aims at providing outstanding prevention, treatment and rehabilitation services relating to drug and alcohol addiction and promoting the culture of fighting drugs through awareness programs and participation in national events. The NRC also hosted a social and cultural contest about the risks of drugs and the means of combating them and avoiding bad company. Furthermore, the NRC praised the campaign ?They Fooled me?, organized by the Security Media Department over the past period. The campaign played a significant role in educating young people about the problems and damages associated with drug abuse and bad company.

The ?Happiest People? competition organized by Aziza Abdel Razaq, representative of the ?Happiest People Voluntary Association? in Dubai, was highly acclaimed by the audience. It inflamed their spirit of patriotism with questions related to the values of loyalty and belonging to the nation and its higher leadership. This leadership that catered to the needs of all inmates, safeguarded their feelings and humanity, protected their rights in accordance with international conventions and laws, and according to the moral values prevailing in the UAE, which stipulate that all those who live in the country enjoy rights that are guaranteed by the law, and by social and humanitarian norms.

The closing ceremony also featured recreational shows presented by magician Yahya Al Majid, whose skillful magic tricks performances were highly acclaimed by both children and their parents.
Towards the end of the ceremony, Major Ibrahim Al Hammadi, from the Punitive and Correctional Establishments Department and Chairman of the Organizing Committee of the GCC Inmates Week, delivered a speech by which he thanked the public for their interaction with the program. He also expressed his heartfelt appreciation for the sponsors and strategic partners for their great support, which contributed to the success of the event. He also thanked all the organizers for their prominent role in coordinating and organizing the event, marking a milestone for the Mushrif Mall.