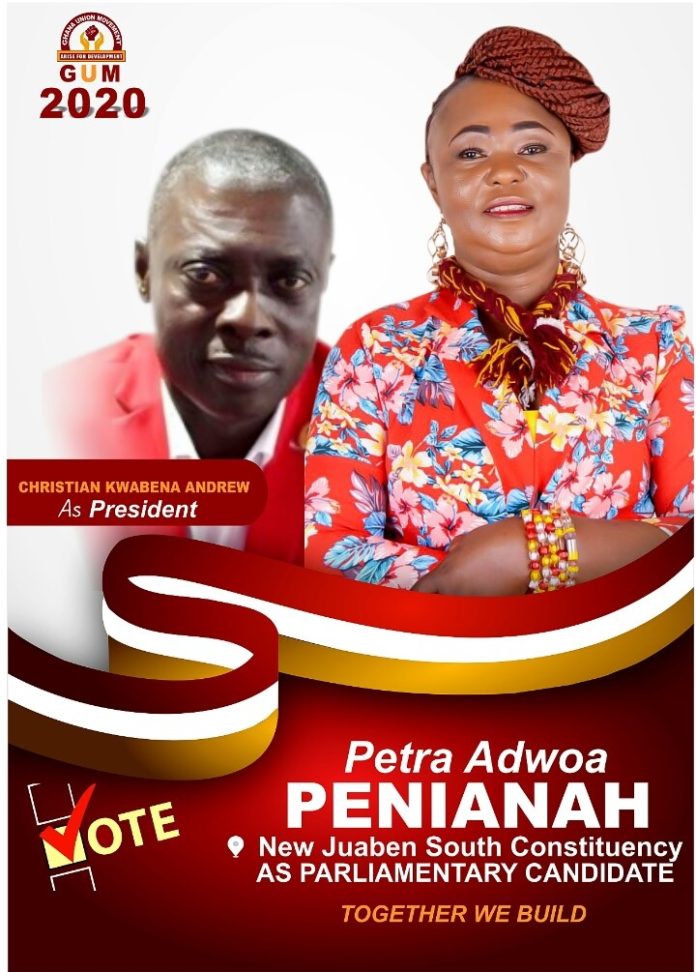 Ms Petra Adwoa Penianah, Parliamentary Candidate for the Ghana Union Movement (GUM) in the New Juaben South constituency, has disclosed that GUM would focus on the welfare of women in the informal sector to improve the economic status of women.

Ms Penianah, indicated that women formed the majority in the informal sector and GUM believed that when the needed attention was paid to the informal sector in the area of soft and accessible loans and improvement of the market areas, it would impact on the socio-economic development.

Speaking in an interview with the GNA, she mentioned that when given the nod as the member of parliament, she would institute a loan scheme with moratoriums in the informal sector, explaining that the current trend where traders were given loan and made to pay in less than two months with huge interest, was rather collapsing a lot of small trading activities.

Ms Penianah has appealed to the electorates to vote massively for GUM in the upcoming elections to change the face of politics in Ghana as well as for her as the member of parliament for the area, to implement the ideas of the party.

She observed that the youth in Ghana were lacking behind in terms of employment, and said the party under the leadership of Reverend Christian Kwabena Andrews, had put down measures to improve the livelihoods of the youth and called on the electorates to vote massively.

Ms Penianah, said when given the nod as the parliamentary candidate, she would establish a fashion training school in the constituency to train the youth as a means of creating job opportunities.

The 46-year old business woman said GUM had a big chance in winning the New Juaben South seat because both the NPP and NDC had failed the people and assured that they would deliver on all their promises when voted into power.