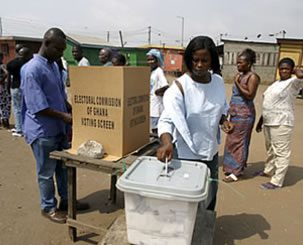 Mr Issah Musah, Gushegu Municipal Chief Executive, has called on residents in the area to eschew violence and continue to live in peace and unity during and after Monday’s general election.

He said the Municipality, until the 2016 elections, was alleged to be one of the major security flashpoints, adding “The story today is different due to the unity we have forged together notwithstanding our differences.”

It was attended by traditional and religious authorities, security agencies, representatives of political parties, non-governmental organisations, and youth and women groups amongst others.

It was to deliberate on ways and strategies to adopt to promote harmony and peaceful coexistence among residents in the Municipality.

Mr Musah called on the security agencies and other stakeholders to join forces to maintain the peace prevailing in the area.

Mr Daniel Konlan, Gushegu Municipal Director of NCCE took participants through some of the electoral laws that prohibits conflicts and violence, urging them to actively play their roles to prevent violence in the Municipality.

Mr Osei Bonsu Appiah–Gyasi, an Official from the Electoral Commission, outlined some of the preparations made by his outfit towards the elections, which included engagement with political parties and training of the physically-challenged to make their own choices during the elections.

The various political parties present at the meeting took turns to pledge their commitment to ensure their followers and sympathisers adhered to the principles of peace.

Similar dialogue meetings were organised at Gushegu and Karaga by the Ghana Catholic Bishops’ Conference with funding support from Konrad Adenauer Stiftung.