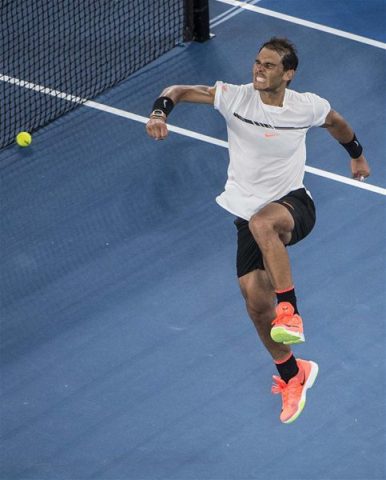 Nadal reacts after the victory.

“For me (this win) means a lot because for me I really start the season playing quarterfinals in a Grand Slam again, especially on hard court after a couple of years without being in this round is a great news,” Nadal told reporters after sending the world no. five home early.

“(I’m) very happy with an important victory against a very good opponent.”

“He’s an opponent that (will) make you feel that you’re playing with a lot of pressure all the time because his serve is huge and he’s playing very aggressive from the baseline,” Nadal said.

“Most of the match, it was quite inconsistent I think from both of us,” Raonic told reporters.

“I was sort of there on the brink in the end of the third set, then turned it around (and) made it really count.”

Should Nadal be successful on Wednesday either Belarusian David Goffin or Gregor Dimitrov will look to stop the march to victory in the semifinals.

Dimitrov downed Denis Istomin in four sets after the Uzbek’s hip became an issue after the second set, putting him out of the match. The world no. 117 who defeated Novak Djokovic in a five set marathon in round two had a car accident 16 years ago, leaving lasting damage to his left side and making recovery from long, difficult matches harder than those in full health.

“I wasn’t ready for these long matches, and of course this match with Novak was difficult physically, and I was lucky to recover for the next match,” Istomin told reporters after leaving to an standing ovation from an adoring Australian crowd.

Early in the second set, one Aussie supported shouted “nice tennis, Denis”, spurring him on against an aggressive Dimitrov, while just before facing match point, another shouted “Denis, we all love you.” The world no. 13 then fired an ace down the center line to win.

“I really have to say thank you for the crowd today and the past days, because even with Novak, in the beginning it was like they’re cheering Novak and me, but then in the end they’re cheering me more,” Istomin, who won the Asian wildcard playoff to qualify for the Australian Open, said.

“In Australia it’s always happened that (the) atmosphere on the court can change, and people start cheering players they like… or even if they like the other guy they’re cheering if you play good. That makes this tournament really great.

“It was really nice that support base, they saw that I was not really in good shape (today), but they support me to the end.”

“For sure it’s different, I’m not saying that it’s not, but (at) the same time, we saw that everyone can beat everyone,” Dimitrov said.

“If you follow your own path and the way you’re playing, the belief that you have, anything can happen.

“Right now I think it’s just important to focus one match at a time, enjoy it, embrace it.”

The women’s draw is continued as expected with Serena Williams dispatching Czech Barbora Strycova 7-5, 6-4 on “probably not my best day” and had to rely on ‘plan b’ .

“It was really good for me to almost lose that so I know my other game is going pretty good, too,” Williams told reporters.

Australia, however, will have to wait another year before again trying to win its home grand slam after Daria Gavrilova lost to Czech Karolina Pliskova 6-3, 6-3 in 73 minutes.

Australia’s Chris O’ Neill was the last female champion to lift the Daphne Akhurst Memorial Cup on home soil in 1978, while Mark Edmondson was the last Aussie man to win the Australian Open in 1976.

Hearts Of Oak, Aduana Stars Make It To Quarters Of MTN FA Cup

Any amount of alcohol use during pregnancy harmful to child’s brain: Aussie research

Aussie state rolls out US$2.18 billion support package for businesses under COVID-19 lockdown