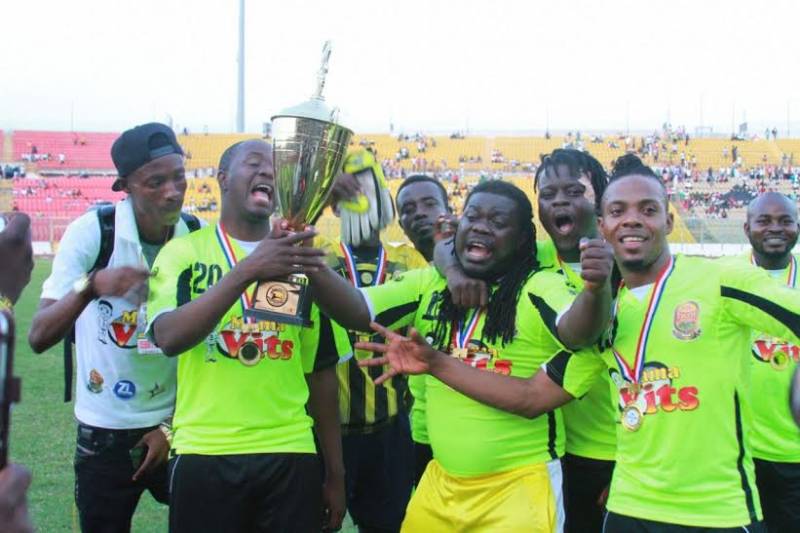 The entertainers celebrating their triumph

The entertainment celebrity team clinched this year?s Star Soccer Fiesta title after posting an impressive 8-6 win over the professional footballers in the fun-game played in Kumasi on Sunday.

The entertainment celebrity team ? made up of musicians and movie stars ? benefitted immensely from the inclusions of Emmanuel Adebayor, Asamoah Gyan and Stephen Appiah in their ranks.

The trio combined well and thrilled the impressive crowd at the Baba Yara Stadium with their impeccable skills which saw Gyan score a brace in the end. Funny face scored the other two goals to see the entertainers win the match with one goal counting for two against the professional players made up of current, prospective and former Black Stars players.

The stars who had breezed into Kumasi on Saturday evening after an eight-hour road trip from Accra took part in a cleanup exercise in Asafo the morning before the game. Gyan and Adebayor desilting a gutter in Kumasi

Asamoah Gyan and Emmanuel Adebayor in particular descended into a gutter with a shovel to get out some dirt amidst huge cheers from the locals.

They were joined by several other notable personalities in the cleanup exercise while promoting the campaign for good sanitation practices.

The delegation then proceeded to the Children?s Hospital in Pampaso where Asamoah Gyan and Emmanuel Adebayor commissioned one of their refurbished wards financed by the joint-foundation of the two national team captains before heading out to the stadium for the climax of this year?s Star Soccer Fiesta. Gyan and Adebayor open up a refurbished ward at the Children?s Hospital in Pampaso

The show was started with an electric performance by Ghanaian dancehall artiste Stonebwoy whose ?Pull up? track got the whole stadium dancing.

It was the professional players who started on the front-foot ? taking a 3-0 lead through former Hearts of Oak forward Winful Cobbinah.

Asamoah Gyan scored a brace to turn the exciting game on its head ? with each goal from the celebrity team counting for two before recess. Stonebwoy started the show with an electric performance

Razak Ibrahim scored to pull the professional players level at the start of the second half.

The professional players restored their lead moments later only for Funny Face to level the scores from a spot kick after Emmanuel Adebayor had been fouled in the box.

Mubarak Wakso then scored to level the game at 6-6 before Funny Face scored in the last minutes to win the day for the entertainers.

Ashanti Regional Police Commander DCOP Kofi Boakye was on hand to present the medals and the trophy to the winning team to cap off yet another memorable Star Soccer Fiesta. Ofori Atta Endorses Bawumia As Next Leader After Akufo-Addo