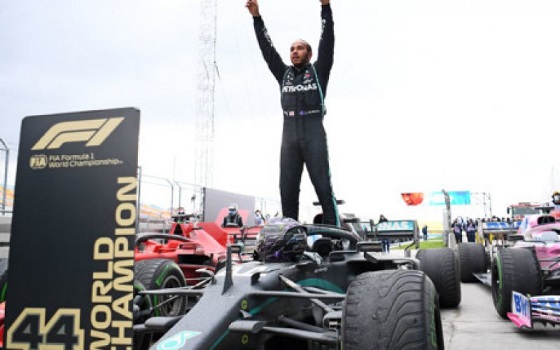 Mercedes’ Lewis Hamilton further cemented his Formula One greatness on Sunday when he clinched a record-equalling seventh world title by winning a wet Turkish Grand Prix from sixth on the grid.

Hamilton showed another masterclass as he claimed a 10th season win and record-extending 94th overall ahead of Racing Points’ Sergio Perez and the impressively strong Ferrari duo of Sebastian Vettel and Charles Leclerc at the Istanbul Park circuit.

Hamilton, 35, is now 110 points ahead of team-mate Valtteri Bottas, and only a maximum 78 points are left up for grabs in the remaining three races.

Bottas, who have needed to finish eight points ahead of Hamilton to keep the title race open, had a race to forget with a 14th-place finish, and his humiliation was complete when lapped by Hamilton with 12 laps left.

The imperious Briton drew level on seven titles with former German great Michael Schumacher whose records were once considered unbeatable.

Hamilton, who made his F1 debut in 2007, snatched the race win record from Schumacher, who had 91, this season, and his 97 pole positions are unrivalled as well.

“I remember watching Michael winning the championships, and just to get one, or two, or three, it’s so hard. Seven is just unimaginable,” Hamilton said. “What a day. There’s a lot to take in.”

“I know I often I say it is beyond wildest dreams but my whole life secretly I have dreamt as high as this. “I wouldn’t be able to do this if I didn’t join this team. The journey we have been on has been monumental.”

But the Briton has long transcended his sport as an outspoken activist for diversity and the environment, with Mercedes not reining him in and allowing him to pursue his personal interests which also include travelling, fashion and music.

“This year I’ve been driven not just by my desire to win on the track but by a desire to help push our sport, and our world to become more diverse and inclusive,” the Briton said on Twitter Sunday.

“Equalling Michael Schumacher’s record puts a spotlight on me that I know won’t be here forever. So, while you’re here, paying attention, I want to ask everyone to do their part in helping to create a more equal world.”

Hamilton has been at Mercedes since 2013 and the team has now won all seven drivers’ and constructors’ titles since the start of the hybrid era, with retired Nico Rosberg top ahead of Hamilton in 2016.

Rosberg named Hamilton’s seven titles “insane” and “one of the greatest achievements in the history of sports” on Twitter, and former England footballer Rio Ferdinand named his compatriot “the greatest sportsman this country has ever produced – no doubts.”

“With all my admiration,” he wrote on Twitter. Bottas conceded defeat, saying: He deserves it fully. He was better overall. It is really good for him. I will try to beat him next year.”

Conditions remained treacherous after a wet qualifying Saturday, with Antonio Giovinazzi of Alfa Romeo and Williams’ George Russell crashing on their way to the grid on a track still wet from more rain.

A normal start without the safety car took place despite the conditions with all cars on full wet tyres, and Racing Point’s Lance Stroll getting off well from his first career pole while Red Bull’s Max Verstappen dropped back from second.

Hamilton briefly moved into third from sixth on the grid before missing a turn and falling behind again while Bottas’ dim title chances effectively ended in two first-lap spins which dropped him to temporary last from which he never recovered.

Stroll and team-mate Sergio Perez in second pulled away on a slowly drying track, and Leclerc was the first to pit for intermediates at the end of lap 6.

Hamilton was stuck in fifth behind Vettel, but needed to take no risks and steadily rose to finally pass Perez for the lead after all others had pitted again.

“I thought the race was falling through my fingers but I kept believing and thought I’d pick up pace at some stage – and that’s what I did,” said Hamilton who also decided against a late pit stop in order not to jeopardise his chances.

Hamilton coasted into the history books while behind him there was last-lap drama as Perez withstood an attack from Leclerc who then missed the podium as Vettel made the top three for the first time this season in his farewell year at the Scuderia before replacing Perez at Racing Point which will be rebranded Aston Martin.

“It is a bit of a surprise to snatch the podium but I am certainly very happy,” said Vettel who was the first to congratulate Hamilton.

Two races in Bahrain and the finale in Abu Dhabi complete the season and Hamilton strongly hinted that he will renew his contract into 2021 when he said “I feel like I’m only getting started.”

“I’m really hopeful for a better year next year and I would love to stay. I feel like we’ve got a lot of work to do here, we’ve only just started our work to make ourselves accountable. I want to help Formula One, I want to help Mercedes in that journey,” Hamilton said.