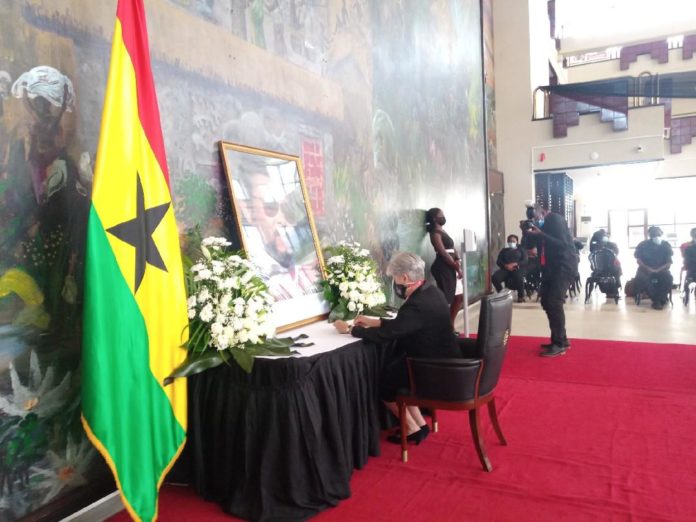 The desperation of the ruling New Patriotic Party (NPP) in the final days to the 2020 election is an apt representation of the saying that a drowning man clutches on straw.

The campaign of the governing party keeps sinking under the avalanche of the hundreds of corruption scandals and the mediocrity that have characterized their governance for nearly four years, making Ghanaians regret ever giving them their mandate and are now determined to show them the exit, come December 7.

This realization has dawned on some of their leaders, especially the ever-lying Vice president Mahamudu Bawumia and the Gabby Asare Okyere-Darko, cousin of President Nana Addo Dankwa Akufo-Addo, who now seek to make political capital out of the unfortunate demise of former President Jerry John Rawlings, founder of the National Democratic Congress ( NDC).

There was a most disgusting story from Bawumia recently describing NDC’s planned activities to celebrate their late founder as hypocrisy and dishonesty, how heartless!

Then, as the party still struggles to get a credible campaign message, Gabby Okyere-Darko came out claiming NDC was using the death of Rawlings to resurrect a dying party.

This attitude by the NPP officials demonstrates clearly that the governing party is so bereft of ideas and so would latch onto the death of the former president for propaganda purposes.

Indeed, if there is any party that is moribund in Ghana, it is the NPP garroting by the flood of corruption allegations that have soiled their image beyond any redemption in the short-term.

Or perhaps Bawumia now wants to tell Ghanaians that he was part of the revolution which led Ghana from the turbulent days of economic and social decadence till year 2000. Was it not the same NDC leaders who have stood by Rawlings, their founder through thick and thin when the NPP sought to destroy his legacy?

Or perhaps Bawumia forgets that NDC is a party born out of two military take-overs, on June 4, 1979 and December 31, 1981; or perhaps the NPP now envies the “coupist” past of the NDC?

NPP must be told that in his life time, the late president never departed from his party. Just like President J.A Kuffuor doesn’t like everything going on in the current government, Rawlings also had problems with some decisions and indecisions by the previous NDC regime.

One of such issues was the fact that the previous regime failed to investigate and prosecute officials of the NPP for their thievery in their previous administration.

Rawlings never spared a moment in his life time to let Ghanaians know that NPP is made up of thieves and murderers, and that is a fact. People should listen to his admonishing to the NDC during the 2016 campaign launch in Cape Coast to understand how Rawlings considered the NPP.

Secondly, as fate would have it, President Rawlings had just buried his aged mother before his own unfortunate demise, and on his mother’s obituary, all those who mattered to him in life were listed, including the NDC.

There was no mention of Bawumia, Akufo-Addo, Okyere-Darko, the NPP or any other political party in this country. That should tell any doubting Thomas that the late president held his party founded on the blood and toil of himself and the revolutionary cadres so dearly.

It must also be noted that when all the list of five short-listed names for the party’s Vice presidential slot was shown to him, the former president insisted that Prof. Naana Jane Opoku-Agyemang was the most suitable die to her high integrity.

Does that really paint a picture of hypocrisy should the party he founded, led, lived with and bequeathed to generations yet unborn decides to honour him? Indeed, NDC has every moral right and responsibility to honour its founder in any form they deem fit.

Ghanaians are wide awake and know where the late father of Democratic Ghana belongs. They know him as the founder of NDC and are also aware of how much NPP had sought to destroy him and his legacy, which culminated in the banning of the celebration of June 4 and December 31 as public holidays and the withdrawal of courtesies to him by the NPP.

If NPP needs a charismatic party founder, they should go and look for one, and leave Papa Jerry John Rawlings alone to rest from his 42 years of hard labour to salvage this nation.

NDC shall celebrate Papa J today, celebrate him tomorrow and make his birthday a memorial in Ghana, NPP , the lying Bawumia and Gabby, the Agyapa merchant can go hang.