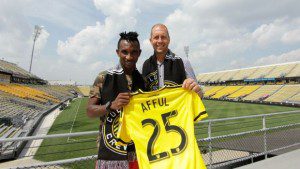 Ghana defender Harrison Afful must past a late fitness test ahead of Columbus Crew?s game against New York City FC on Wednesday night.

Afful has been training with Columbus for about two weeks, traveling with the team to Colorado despite not making the game-day roster and training privately with coaches during the rest of the roster?s bye-week break.

But the Ghanaian is hoping to be fit for game against New York City.

?I?m getting my fitness back,? he said. ?I?ve been working a lot; so far, so good. So I?m just praying and hoping that I?ll make my debut Wednesday.?

The 29-year-old joined Crews in July after ending his four-year stint with Tunisian side Esperance.