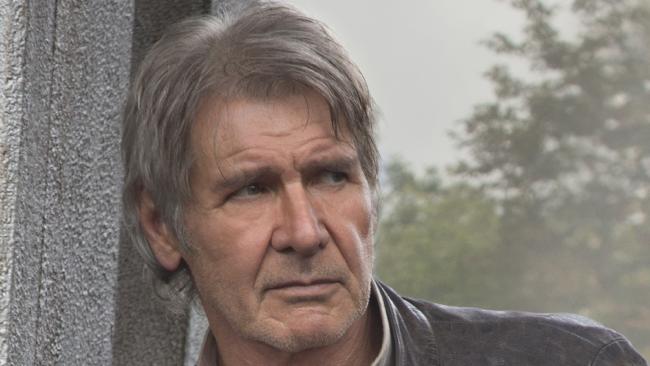 HARRISON Ford has joined an exclusive group of people who have viewed an advanced screening of hyped feature film Star Wars: The Force Awakens ahead of its mid-December release — but he may have just given away a shocking plot twist to fanatics around the globe. The 73-year-old Hollywood actor who plays Han Solo in the film was taking part in a Twitter Q&A session with fans on Friday when he was asked about his favourite action scene in the seventh instalment of the series.

Ford, who does not have a Twitter account of his own, picked “the sword fight with Rey and Kilo Ren. Fantastic visual storytelling”, according to E! Online.

Star Wars fanatics were quick to note that the scene Ford referred to was not featured in the trailer or TV spots, sending them into a frenzy given that Rey (Daisy Ridley) hasn’t been seen with a lightsaber.

The revelation prompted many fans to ask the question, ‘could the force be strong in Rey?”

TV spots have shown Kylo Ren waving his lightsaber in Rey’s face, which could potentially lead to a lightsaber battle, E! Online reported.

Some picked up on Ford’s misspelling of ‘Kylo Ren” and speculated he could have made another mistake and had intended to write “Finn” (John Boyega) instead of “Rey,” as her ally has been seen using a lightsaber.

Others speculated that the actor was simply teasing fans to add to the hype ahead of the film’s US release on December 18.

Ford was one of a select few to have seen the film before its release.

According to E! Online, aside from late Star Wars fan Daniel Fleetwood, only J.J. Abrams’ friend Steven Spielberg and a handful of Disney’s executives have screened the most anticipated movie of the year.

The film is being kept so under wraps that three Star Wars spin-off directors — Phil Lord, Christopher Miller and Colin Trevorrow — have said they haven’t seen the film yet.

The film is scheduled for release in Australian cinemas on December 17.

Ghana’s Olympic swimmer talks about all the highlights.