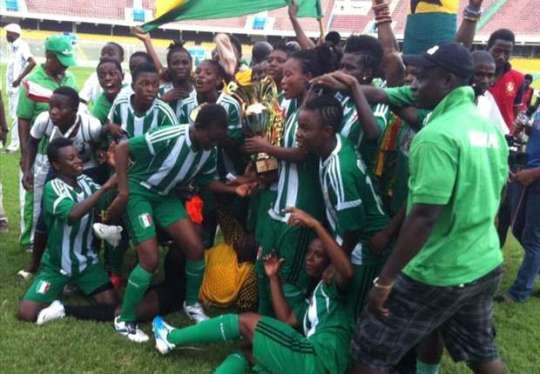 A goal each from Faustina Nyame, Evelyn Badu and a brace from Doris Boaduwaa were enough to silence Ampem Darkoa ladies to emerge champions of the 2020/21 Women’s Premier league (WPL).

The much awaited match played at the Madina Astro turf in Accra on Saturday saw a 4-0 score line in favour of Yussif Basigi’s charges.

Despite the heavy downpour at the venue, spectators thronged to the match center to witness the sterling performance from both sides which ended all joy for the Sekondi based club.

Hassacas Ladies, who were leaders of the Southern zone with 33 points after 14 matches convincingly ended the unbeaten run of Ampem Darkoa who topped the Northern zone with 34 points.

It was Nyame who headed home the first goal in the 11th minutes after connecting a well taken cross from Milot Abena Pokua before Badu gave Hasaacas a two-goal advantage before recess.

From the break, Hassacas piled more pressure on their opponent which proved futile courtesy two goals from Boaduwaa in the 69th and 84th minutes.

Ampem Darkoa’s Sonia Opoku was named the Nasco Player of the match.

At the end of the WPL season, Hassacas’ Janet Egyiri was named the Best Defender of the season, Berry Ladies’ Constance Osei Agyemang was adjudged the beat player of the season.

Also, Comfort Yeboah from Ampem Darkoa Ladies won the Discovery of the year, Grace Banwa of Hassacas ladies was named the best goalkeeper.