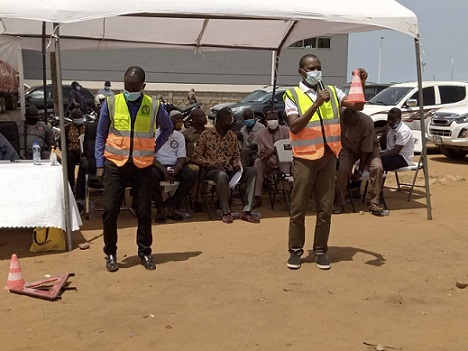 The National Road Safety Authority (NRSA) said haulage trucks moving in a convoy could be fertile grounds for accidents as other drivers become frustrated when following them.

Mr Daniel Hardy Wuaka, the Deputy Director of Planning and Programmes, NRSA, said trucks in a convoy moved slowly without spacious intervals for other vehicles to manoeuvre, thereby forcing some impatient drivers to engage in wrongful overtaking, which often resulted in accidents.

He, therefore, advised drivers of haulage trucks and similar slow moving vehicles to consciously leave spaces for other smaller vehicles to easily manoeuvre to prevent accidents.

Mr Wuaka was speaking at a sensitisation workshop for haulage truck drivers, organised by the Ghana Shippers’ Authority (GSA) in Tema.

“Since you are moving slowly, other vehicles will like to overtake but because it’s dangerous to overtake two or three trucks at the same time, they become frustrated when following you and may be forced to do wrongful overtaking leading to accidents,” he said.

He advised haulage truck drivers to park off the road when their vehicles develop a fault and display warning triangles.

Mr Wuaka said the triangles must be positioned 46 metres from the vehicle both at the rear and front, adding: “Most of the times, drivers put the triangle just by the trucks, which is very dangerous as people may drive into it before noticing the danger”.

He cautioned the drivers against drunk-driving and relying on illicit drugs to give them energy to drive, adding that that impaired the judgement of the driver.

He said it was natural for drivers to get tired during a long journey and advised them to park off the road and take a walk or rest when they felt tired and sleepy.