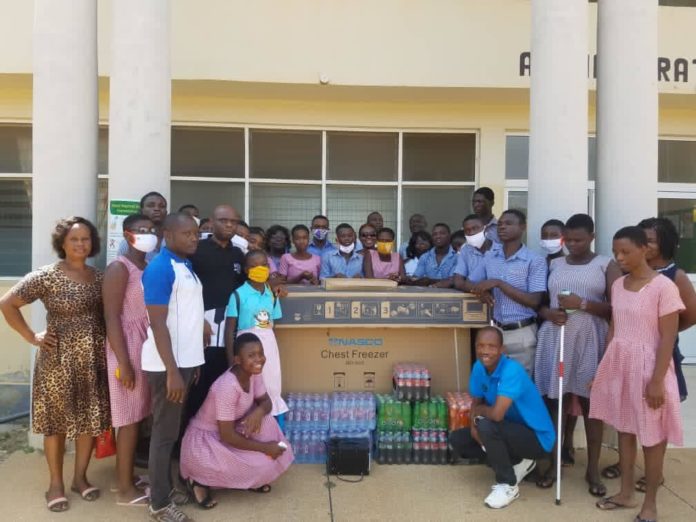 Mr Abraham Annang Yemoson, Headmaster of Cape Coast School for the Deaf and Blind has appealed to government and benevolent organizations to help the school resource its computer Lab to enhance teaching and learning of ICT in the school.

He said the school lacked a functional ICT lab and expressed worry about how it was affecting students’ performance in the subject.

“The structure is good, but there is nothing in the building apart from a weak furniture”, he lamented.

“We need at least 40 computers to fix in the lab so that the students can have hands-on learning”, he said
Mr Yemoson made the appeal when the 1993 year group of the Old Achimotan Association (OAA) extended its benevolence to the school and donated a deep freezer, 65-inch LED Television, a laptop and some assorted items.

The donation was in response to a request by the Headmaster, who is also a member of the group.

According to the Headmaster, the laptop donated by the group would be the only computer for the school’s ICT centre.

Mr Yemoson said inadequate classroom space, was affecting effective academic work, adding that the students needed to be divided into between five and 10 for impactful teaching and therefore needed more space.

She mentioned the poor road network in the school as another challenge that needed immediate attention because the blind students suffered a lot using it.

He expressed gratitude to the OAA 1993 year group for the gesture and assured that the donated items would be put to good use.

Mr Jerry Doe, President of the OAA 1993 year group said, the gesture was to share the little they had with the underprivileged and to encourage and let them know that they were loved.

He pledged the determination of the group to touch the lives of the underprivileged in the society, adding that “we are mindful of their needs”.

Mr Doe encouraged other philanthropists and group support the school and many other schools in similar situations.