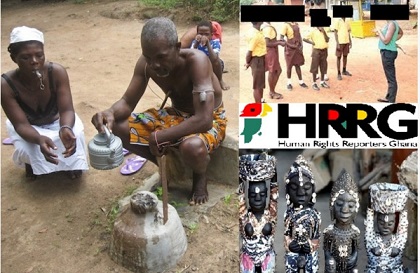 An investigation by the Human Rights Reporters Ghana (HRRG) has revealed that the headmistress of the Mt. Sinai Methodist JHS located at Kumasi in the Dompoase Circuit of Asokwa Municipality in the Ashanti Region, Madam Akyaa Kusi, has taken her students to a Deity known as Obosom in the area to swear that they should die with their relatives if they have stolen an amount of money from her office.

According to the facts available to HRRG, she suspected the students might have stolen an amount of GH¢1000 which was funds from the school’s capitation grant she kept in her office.

Investigations carried out by the Human Rights Reporters proved that the event occurred, parents of the children have also confirmed the story.

The parents of one of the students who were forced to swear to the Deity (Obosom) have not been excited about the sole decision of Madam Akyaa Kusi, the headmistress, who doubles as the Girls Fellowship President in the Methodist Church at Atonsu took.

“Taking JHS students to Deity (Obosom) over missing capitation grant cash… without reaching out to the parents and… all that transpired baffled me” The parent said in an interview with HRRG.

They feel they should have been informed about the incident instead of the sole decision of the headmistress to take the children to the shrine.

She is said to have later bribed the students with new uniforms and sandals and warned them not to disclose what had transpired between them to anyone, not even their parents.

However, the parents got a hint of the issue later and confronted the leadership of the school, reported it to Municipal Education Office in Asokwa but nothing has been done about it.

When HRRG contacted the headmistress in an interview, she indicated that the facts available to the (HRRG) were partially true but did not provide any additional information.

It has been a little over two years and the Municipal Education Directorate seems not to be interested in dealing with the matter. It is not clear if education managers are shielding the school leadership.

Detailed information available to HRRG further shows that the director and the CS are both aware of the issues but have not taken the necessary steps to address it.

In an interview one of the parents whose child was a victim of the actions of the headmistress confirmed the story to the Human Rights Reporters Ghana (HRRG).

The parents of these children want both the Methodist Educational Unit and the Ghana Education Service (GES) to investigate this matter to get to the root of it to help these innocent children out.

It is also alleged that some teachers who raised concerns about the steps taken by the headmistress have since been transferred from the municipality.

The HRRG believes the rights of these children have been violated and that parents whose children were accused to have stolen the Ghc1000 were not considered as key stakeholders in addressing the issue.

We do not know what will happen in the future…; we are worried about any future implications…; one of the children accused who went to swear at the shrine is a twin and that in itself is a big issue… the madam did not do well at all” one of the parents interviewed said.

Failure of the Methodist Educational Unit and the GES to ensure the actions of the headmistress of Mt. Sinai Methodist JHS in the Dompoase Circuit of Asokwa Municipality in Kumasi are properly dealt with has further dented the image and credibility of the two institutions.

The Human Rights Reporters Ghana is calling on the two stakeholders to as a matter of urgency take necessary steps to deal with the matter as parents are worried about the future of their children and their families two years after the incident.

CODE OF CONDUCTS OF TEACHERS IN GHANA

“Any act of omission without reasonable excuse by an employee that amounts to a failure to perform in a proper manner any official duty assigned to him or her as such or that contravenes any rules of regulations or enactment relating to the Education Service or that is otherwise prejudicial to the efficient conduct of the Education Service into disrepute shall constitute a misconduct.”

Again, part two of the code: Rules of conduct spells out under Protection of Children from Torture and Other Degrading Treatment unprofessional behavious not expected of teachers which include Psychological Violence which the students she alleged to have taken them money and later took them to the shrine have gone through for the past 2 years. Section one of rules on Psychological Violence states “No act of a teacher shall have a negative psychological effect on a school child. Therefore, no teacher in the course of duty shall intimidate, insult, tease, harass, threaten, snub or discriminate against any child.”

“The fact that the Ghana Education Service in the Municipality has not taken up the matter to ensure the rules apply leaves much to be desired.

Recently, teachers were dragged to the disciplinary committee of the service for charging 50 peswas for extra classes, what has been done in this case of the headmistress who should be aware of the statutes and set good examples?” Mr. Joseph Kobla Wemakor, the Executive Director of Human Rights Reporters Ghana quizzed in an interview with this portal.

Children who come to school must be protected and treated with respect no matter the situation while investigating unacceptable conducts and behaviours of these learners.

“Any decisions that put the children at risk physically, or mentally go contrary to the rights of minors especially in the school certain where teachers are expected to own up for their decisions and actions.” He added.

If this issue of taking JHS students to a shrine to swear over a missing capitation grant cash is not dealt with well, it will set a bad precedent within our educational institutions and the GES would be blamed.

Further checks reveled there are witnesses who are ready to testify should the need be to confirm that the issue took place.

The Human Rights Reporters Ghana is therefore calling on the Ghana Education Service to right the wrong in the case and set a good precedent in such matters that come before it to deter like-minded officers of the service who do not follow the rules of conduct while also ensuring students in public schools are protected from such unprofessional conducts.