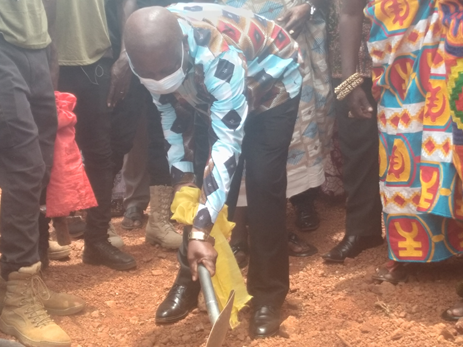 Mr. Kwaku Agyemang-Manu, the Minister for Health, has cut the sod for the commencement of work on a District Hospital for the people of Atwima Kwanwoma at Twedie in the Ashanti Region.

The project is one of the 11 hospitals being built at € 71 million in Ashanti, Eastern and Greater Accra Regions, and a polyclinic at Mim in the Ahafo Region.

Mr. Agyemang-Manu said the government’s commitment to provide health infrastructure across the country to make healthcare accessible to Ghanaians remained on course.

He said work on hospital projects at Konongo, Tepa, Bekwai, Sewua, and Afari was steadily progressing, adding that, that of Kumawu and Fomena had some challenges but the contractors were expected back to the site soon.

Similar projects, he disclosed, were currently ongoing in other regions as the government takes steps to secure funding to provide more health facilities.

He said the provision of health infrastructure across the country formed part of the government’s vision to achieve Universal Health Coverage (UHC) in the shortest possible time.

The Health Minister said funding for the projects had been secured and assured the people that the project would be completed as scheduled without any delay.

He used the occasion to remind them that the fight against COVID-19 had not been won yet and that anyone who disregarded the safety protocols was at risk of infection.

“Let us all adhere to the protocols so that we can collectively defeat the virus as a people”, he advised.