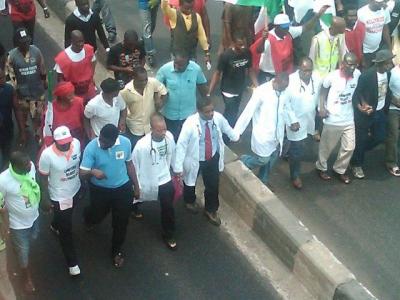 Health workers in Kaduna State under the aegis of Joint Health Sector Union (JOHESU) on Friday declared an indefinite strike over non-implementation of the Consolidated Health Salary Structure (CONHESS) agreement signed two years ago with the State Government.

Addressing a news conference in Kaduna, JOHESU Chairman, Mrs Cecilia Musa, said that the government only implemented 70 per cent of the agreement, saying the industrial action would begin on March 1, 2014, if the State Government failed to fulfil the remaining 30 percent of the agreement.

Musa claimed that nurses in the state worked under stressful condition as they attend to 30 patients daily, against the World Health Organisation (WHO) standard of a nurse per six patients, noting that some of the union?s members had decided to seek greener pasture in other health facilities where CONHESS is fully implemented.

She said, a meeting between officials of the union and the State Government on February 3, 2014 and February 25, 2014 were deadlocked, Musa said  that strike remained the only option open to the union to push for the implementation of the balance of  30 per cent Consolidated Health Salary Structure(CONHESS)  being an unfulfilled promise by the State Government.

Meanwhile, the State Commissioner for Health, Dr Dogo Tot, appealed to the health workers to be patient and that the workers should shelve the impending strike.