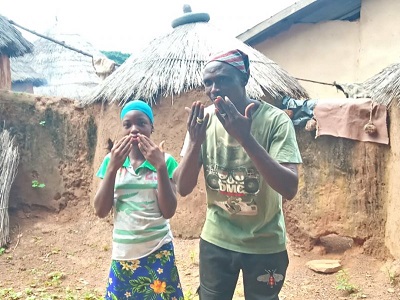 Through NORSAAC’s “Promoting Adolescent Safe Spaces (PASS)” programme and funding support from UNFPA-UNICEF, Salmu is now in Primary One at the Savelugu School for the Deaf in the Northern Region.

She was in her second term when the COVID-19 pandemic-induced closures of schools, which took effect on March 15th, brought her back to her home village of Yoggu in the Tolon District of the Northern Region.

came to light when a combined team of UNICEF and NORSAAC paid a working visit to Salmu Alhassan to find out how the prolong stay at home due to the COVID-19 pandemics-induced closure of schools was affecting her.

Mr Fuseini Alhassan, the father of Salmu, who spoke Dagbani, through an interpreter, expressed gratitude to UNFPA-UNICEF and the NORSAAC for coming to the help of his daughter.

He said in 2019, NORSAAC with the funding support of the two UN agencies and the collaboration with the Department of Social Welfare and Community Development of the Tolon District and the Special Education Unit of the Tolon District, his daughter started primary class one at the Savelugu School For The Deaf in November 2019.

This, he said, had gone a long way to help improve her ability to communicate with others.

He noted that the prolonged COVID-19 pandemic-induced closures of schools was impacting negatively on Salmu.

Madam Nancy Yeri, the Project Manager, Promoting Adolescents Safe Spaces (PASS) Project, NORSAAC, said PASS was an intervention to promote safe spaces for adolescent girls; stating that it was being executed by NORSAAC in Northern, North East and Savannah Regions with funding from UNICEF-UNFPA.

She said the project is funded under the auspices of The Global Programme to Accelerate Action to End Child Marriage, which was being implemented in 12 countries, including Ghana.

She said the Global Programme aims to ensure that all girls fully enjoy their childhood free from the risk of marriage, and that they experience healthier, safer and more empowered life transitions in control of their own destiny.

She said, NORSAAC met Salmu during one of the PASS meetings at Yoggu in the Tolon District in August 2019, and they took interest in her welfare and informed her father of the opportunity for her to attend the Savelugu School for the Deaf.

In 2016, UNICEF and UNFPA launched the Global Programme to tackle child marriage in 12 of the most high-prevalence or high-burden countries, including Ghana.

The Global Programme is supported by the Governments of Belgium, Canada, the Netherlands, Norway, the United Kingdom and the European Union, and Zonta International.

The implementing districts of PASS in Ghana, include Tolon, Tatale and Kpandai Districts in the Northern Region; the West Mamprusi and Mamprugu Moagduri Districts of the North East Region; and the Bole District in the Savannah Region; the Cape Coast Metropolis and the Komenda-Edina-Eguafo-Abrem Municipality in the Central Region.

Dedicated to championing an improved quality of life for empowered women, youth, and marginalized groups asserting their rights, NORSAAC actively engages in community and policy-based work in the areas of Sexual Rights and Reproductive Health, Gender and Governance, Livelihood and Entrepreneurial Development, and Education.

Mr Albert Anamoo, the Tolon District Director of Social Welfare and Community Development, said the Department was doing its best to support children, especially children with special needs to enrol in schools such as the Savelugu School for the Deaf and the University of Cape Coast.

Mr Anamoo urged parents of children with special needs not to hide them but to seek the support of the District Assembly.