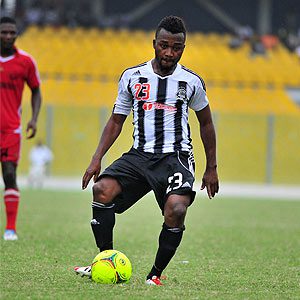 Gladson Awako’s superb 87th minute free-kick sealed a magnificent comeback for Hearts as they recorded their first win of the season against Bibiani Gold Stars in matchday four encounter played at the Accra Sports Stadium.

Prince Kwabena Owusu put Bibiani Gold Stars ahead in the first half, but two late second-half goals from Isaac Mensah and Gladson secured maximum points for the Phobians.

It was the first match for new Hearts coach Slavko Matic, who managed to get his first win.
Hearts started the game with intensity in every department of the game but were dealt a huge blow in the ninth minute after Owusu scored the opener.

It was a spectacular strike from the Bibiani Gold Stars marksman who looped the ball past goalkeeper Richmond Ayi, who was way off his goal line.

Hearts seemed to have changed their style of play under their new coach as they moved the ball very swiftly in search of the equaliser.

Despite the pressure from Hearts, it was the away side who came close to doubling their lead through Ibrahim Laar, but goalkeeper Ayi pulled off a brilliant save to keep the scoreline the same.

Hearts in the late stages of the game pressed for the equaliser and Obeng Junior came close to restoring parity, but his effort struck the base of the post.

Bibiani Gold Stars held on firmly to their lead as the game went to recess.
Hearts started the game on the front foot at the start of the second half and Ouatching Yassan had a clear chance to pull parity for Hearts but failed to test goalkeeper Joseph Baah.

A moment of madness from goalkeeper Joseph Baah saw him sent off by referee Tampuri Emmanuel after a push on Hearts striker Ouatching Yassan, having also handled a back pass with his hands.

This brought about a long stoppage, but Gladson Awako couldn’t capitalise from an indirect free-kick.
Hearts did capitalise on their man advantage after Isaac Mensah pulled parity for his side in the 78th minute with a close-range finish.

Hearts were much the better side into the late stages of the game, and Awako stepped up to curl in a free-kick just outside the penalty box.

The Phobians hanged on to record their first win of the season despite the late attacking surge from the away side.