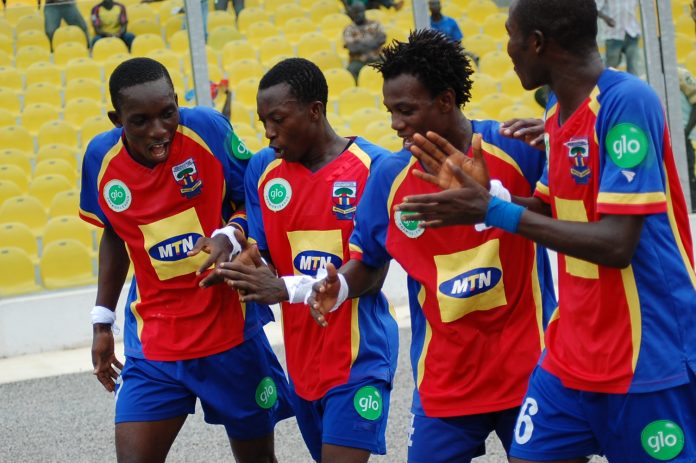 A first-half strike from the penalty spot by Samuel Inkoom ensured Hearts of Oak secured maximum points against Bibiani Gold Stars in a match-day 29 encounter of the 2021/22 Ghana Premier League.

It was Inkoom’s second goal for the Phobians as they moved up into third position with 47 points, with five matches to end the season.

Hearts were missing a sizable number of players due to a “strange” illness that had hit their camp, having only named four substitutes on the bench.

Sulley Muntari, who has missed a couple of games, was named in the starting line-up while Larry Sumalia made his first start of the season at center-back.

Hearts started the game on the front foot and deservedly went ahead in the 12th minute after the referee, Qadir Abdul Latif, awarded them a penalty after Benjamin Yorke was brought down.

Inkoom made no mistake from 12 yards as he struck the ball past Bibiani Gold Stars goalkeeper Yaw Ansah Fufro.

Hearts, despite missing a few of the starters, were very dominant in possession and Sulley Muntari should have doubled the lead for the Phobians but goalkeeper Yaw Ansah delivered a stunning save to deny the former Ghanaian International.

Enock Asuboteng who was handed a rare start also had a glorious opportunity to give Hearts the cushion goal but shockingly missed from close range in the late stages of the first half.

The first half ended with Hearts holding on to their slim advantage.

Hearts started the second half on a sluggish note and Gold Stars striker Prince Owusu Kwabena should have found the back of the net in the 47th minute, but goalkeeper Richard Attah pulled off a brilliant save.

The pressure from the away side in the second half was relentless and Prince Opoku Agyemeng came close with a drive at a goal which went wide with a quarter of the game left.

Hearts were largely on the back foot for the most part of the second half, with players beginning to show some glimpses of fatigue in their play.

Bibiani Gold Stars player Evans Owusu came close in the late stages of the game with a long-range drive, but goalkeeper Richard Attah was equal to the task once again.

Despite the late surge for an equalizer from the away side, Hearts held on to secure all three points at the end of the match.