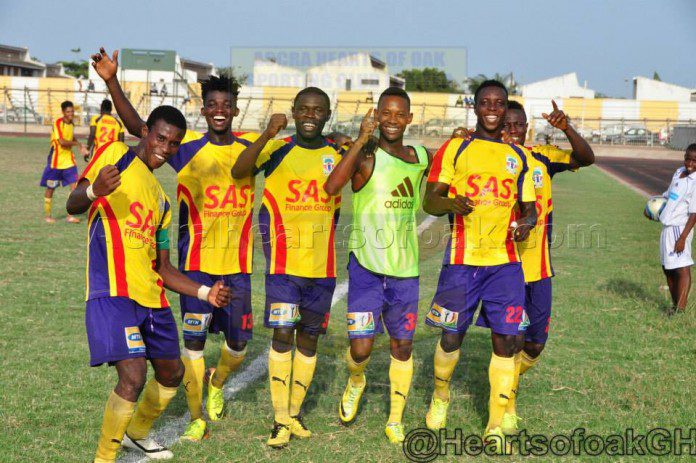 On the other hand, Kumasi Asante Kotoko secured their first victory in the premiership with a lone goal victory over Sekondi Hasaacas. Below is the summary of the league matches. Kumasi Asante Kotoko’s Kwame Boateng brought great sigh of relief to his manager David Duncan and the entire Kotoko fraternity after his solitary goal secured the first victory for the porcupine warriors after five matches. A stubborn Hasaacas side on the day held Kotoko until the 75th minute, before striker Boateng came off the bench to score match the winner . Duncan before the game was reportedly given a three match ultimatum to prove himself worthy for the job or face the sack.

Defending league champion, Ashantigold are still limping in the start of the season as they were battled to another draw with Aduana stars at home on Saturday and are still stacked to the 10th position on the log.

A first half penalty strike by Emmanuel Baffuor was cancelled out by former Tema Youth attacker Bright Adjei on the brink of full time.

Accra Hearts Of Oak continued their emphatic record in the league after snapping all three points in Tema. In a game that saw no goals recorded in the first half, book makers could anticipate the outcome of the game. A goal from Isaac Mensah and a brace by Ibrahim Musah cancelled Fredrick Boateng and Ahortor Gockel’s goals to wrap up all 3 points for the table leaders.

Baba Mahama opened the scoring for the home dominants Techiman city at the Nana Ameyaw Stadium to secure all three points as they triumphed over Dreams Fc.

At the sogakope park, Martin Antwi’s lone goal was enough to round up all three maximum points for Wafa.

Bechem United and Ebusua Dwarfs shared the spoils as their game remained barren throughout proceedings.

Meanwhile, wa all stars who play the league leaders Accra hearts of oak in a crucial tie won by a goal to nil against New Edubiase.

Berekum Chelsea was out of action as Medeama was on continental duties due to the former’s CAF Confederations Cup encounter with Libyan side Al-Ittihad Tripoli on Sunday on match day five.