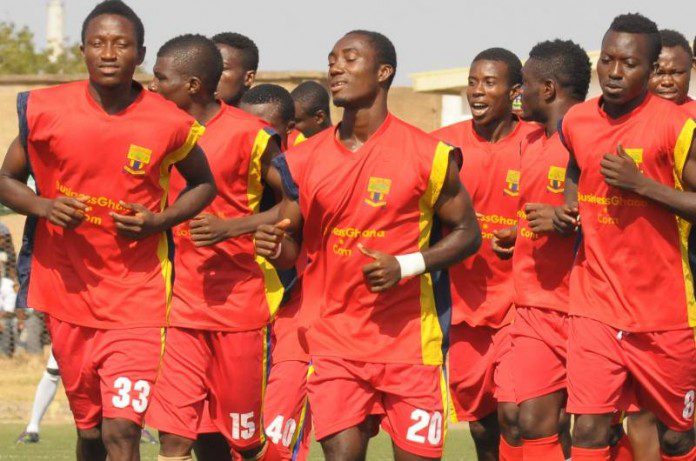 The players are complaining about non-payment of four months salaries as the harsh economic reality hits their pockets.

Key players of the club are leading a surreptitious campaign to force authorities to settle their outstanding monies owed them, with couple of weeks for the start of the new season.

The players have resolved to unanimously disrupt the team training schedule in protest of the outstanding monies amid fears it could wreck another top-flight campaign which has been far from convincing in the last six years.

Newly-appointed coach Kenichi Yatsuhashi is believed to be distraught at the turn of event as he fears the stand-off could affect his chances of winning the double next season.

The financial situation at the capital-based club is murky after the country’s leading football online portal, GHANAsoccernet.com scooped management have also not received their due amid massive unrest at the club.

“When we have to train or play in matches, we don’t complain. But I don’t know why this issue of salary has been a problem in the club for some time now. It’s very difficult for us as players of the club and we don’t know what else to do or say,” a senior member of the team told GHANAsocccernet.com on condition of anonymity.

“We understand that next week we will be leaving for camping and we will be there until the league starts. How are we going to concentrate without having our money?”

“We have families to take care of and things to do. These are some of the things that affect players’ performance on the field of play, but many don’t see it.

“Moving to camp with no money will be difficult. I can’t tell but I know most of the players will not turn up.”

Hearts, one of the most successful Ghanaian clubs, are in a financial quagmire despite the constant denial by officials as they struggle to meet their financial obligation to players and other staff.

Players are struggling to keep up in a sorry financial episode which has rocked the club in the last couple of years.

Fans have been left crestfallen as they continue to play catch-ups in the Ghanaian top-flight with no sight in end to their troubles.

The Phobians who commenced a non-residential pre-season two weeks ago, are set to move it a notch higher but appears the situation could change for the worse.