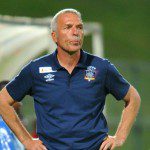 Ghanaian giants Hearts of Oak have started negotiation to bring Ernst Midderndorp back to the club, GHANAsoccernet.com can exclusively reveal.

Top officials of the Accra-based side are in advance talks with the German trainer over a potential return to the club he left 11 years ago.

Midderndorp, who is currently without a club after terminating his contract with South African side Chippa United, is believed to be interested in returning to Ghana and has instructed his representative to tie the deal.

GHANAsoccernet.com can reveal that the former Kotoko coach will be appointed to take charge of the team after the end of the current campaign if the deal is fruitful.

The expatriate will be tasked to transform the side which has gone trophyless since 2009 as they have watched in agony as their bitter rivals Kotoko swept three consecutive Premier League crowns.

Ex-Berekum Chelsea trainer Tony Lokko has been heavily linked with the vacant job while attempts have been made to lure Medeama coach Tom Strand.

But it appears the club will overlook the two coaches and go in for a top notch tactician and Midderndorp fits the bill.

Midderndorp is not new in Ghana after a fairly successful stint with Kotoko during the era of celebrated ex-chairman Herbert Mensah between 1999-2002.