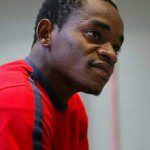 Hearts have been linked with a move for Medeama attacking midfielder Michael Helegbe.

Helegbe, 29, has a year left on his contract with the Ghanaian side but is not keen to extend the deal.

The former Asante Kotoko attacking enforcer has returned home after a fabulous loan spell at Lebanese side AC Tripoli.

Hearts have expressed interest in bringing him to the capital as they see him as the man to steer their campaign next season.

Officials of the Rainbow Club have initiated talks with Medeama over the availability of the former Black Meteors captain.