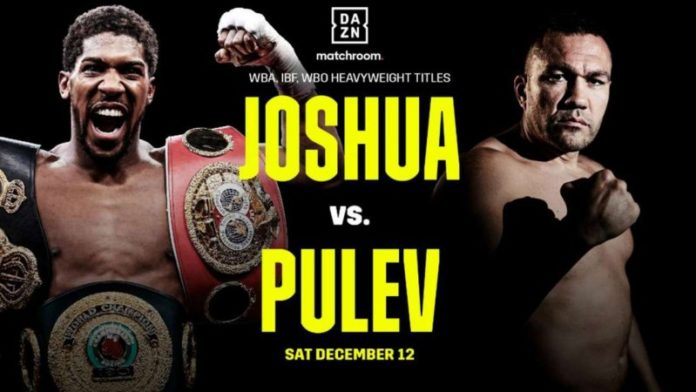 Kubrat Pulev has warned heavyweight champion Anthony Joshua he aims to upset plans for Joshua’s mega fight with Tyson Fury in 2021 by winning the belts in honour of his late father.

A bigger fight is at stake for the winner of the WBA, WBO and IBF world titles as reports suggest the current owner Joshua is set to fight Tyson Fury, the WBC champion, in 2021 for the historic label of becoming the first four-belt undisputed heavyweight king.

Joshua has not fought for over a year since recovering the belts in a Saudi Arabia rematch with US-Mexican Andy Ruiz, who stunned Joshua in New York with his first professional defeat in June 2019.

Bulgaria’s Pulev believes lightning can strike twice as he aims to remove Joshua and take his place in a fight with Fury as the first male world champion from his country.

“We see a lot of mistakes from Anthony,” said the 39-year-old Pulev.

“I think these mistakes stay. When I am good, I beat him well. Right now I feel very good, strong and powerful.

“Nobody from my country has ever been heavyweight champion of the world. I don’t believe that the Joshua v Fury fight is going to happen because I will win on Saturday night. I am the new world champion.”

Pulev was supposed to fight Joshua three years ago in Cardiff, Wales, as his first opponent following his career-defining win over former champion Wladimir Klitschko.

Joshua had to face a late replacement in Carlos Takam, who he stopped in 10 rounds, when Pulev pulled out with a shoulder injury.

The 2012 Olympic gold medallist said Pulev missed his best chance for victory because he was still learning his trade compared to now where he has grown with experience.

“Looking at who I am today, I like to reflect a lot and I think ‘I was just a pup, I was a little puppy,’ Joshua defined as his position in 2017.

“I’m wiser now. I’ve lost a fight and I would never want to lose a fight again, I know what that feels like.”

“Pulev is a tricky customer. He’s not going to be an easy fight, it’s a banana skin,” he added.

“I’m at a level now where I can’t take easy fights or warm-up fights.”

As for a pending clash with Fury, even Joshua is not sure it will happen next year, but the two-time world champion insists he will not shy away from the challenge.

“Imagine I am set to fight Fury three months away, and two weeks before the fight he pulls out. This is the type of character I’m dealing with,” Joshua explained.

“I’m keen, I’m a straight shooter. I don’t want to mess around. If he wants to fight, he knows I’ll fight. The longer he leaves it, the worse it is.”

A Bulgarian barrier stands in the way of that all-British bout and Pulev says his determination to win stems from a promise to his late father.

“His project was to have sons, and for them to become boxing champions. He looks down from above and I’m sure he’s happy. He wants to win on Saturday night with me.”

Joshua and Pulev will fight in front of 1,000 fans on Saturday in accordance with England’s coronavirus restrictions, and Pulev had a message for them and a global TV audience of millions.

“I can tell the fans that I will expose AJ (Joshua) again and prove they have been idolising the wrong guy,” he said. “I will expose him to the world for a second time.”