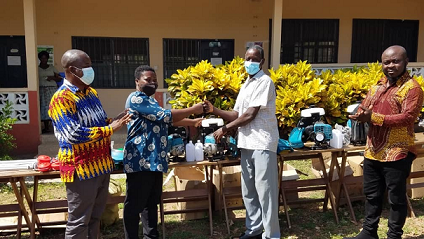 Rice growers in the Volta Region have appealed for government support to expand their farms.

He said most farmers were as a result, forced to rotate crops on the same field season after season.

“There are lots of tree stumps in our fields and it is the biggest problem for rice farmers. They are preventing the expansion of farms. Cleared fields ease our work,” Mr Mawutor stated.

He was among some 450 farmers from the Region, who benefited from the government’s provision of potable rice harvesters, an initiative made possible through the support of the Canadian Government under the Modernising Agriculture in Ghana (MAG) programme.

The machines are manoeuvrable, user friendly, and designed to enable harvesting in fields not engineered, and also have accessories for reconfiguration into grass-weeding tools.

Mr Mawutor said the machines would aid harvesting on the stump-ridden farms, and would further help reduce dependence on weed killers.

He said lack of irrigation was another problem small-scale rice farmers faced and appealed to stakeholders to intervene in that area.

Mr Sylvester Owusu, Regional Agricultural Engineer, who handed over the harvesters, said most farmers had limited tools and complained about labour availability.

He said the combined harvesters could not be utilised on undeveloped fields, thus the provision of the small, motorized harvesters was a refreshing intervention.

The Engineer noted that reliance on combine harvesters, most of which arrived from Tamale, was a major cause of post-harvest losses in the rice-growing sector.

He said the region remained the leading producer of rice by volumes, thanks to the government’s interventions, and added the Ministry of Food and Agriculture, as part of its Special Rice Initiative, was focusing on the provision of farming machinery, farmland development, and accessibility to quality processing equipment.