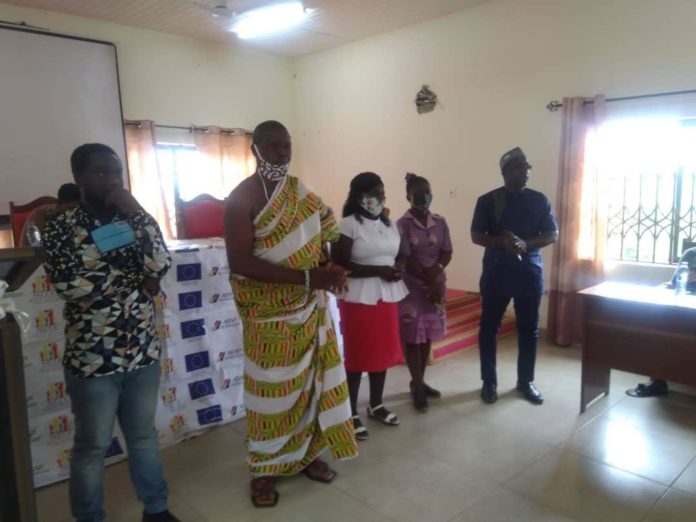 Nana Nyansaboakwa I, Chief of Kwamoano in the Twifo-Hemang-Lower-Denkyira District (THLD) of the Central Region has called on stakeholders to help him to minimize the increasing menace of teenage pregnancy in his town.

Another issue of great concern to him was the springing up of marijuana spots and other social vices that were endangering the future of the youth in the Area.

Nana Nyansaboakwa raised the concern at a Social Auditing Programme organized by the National Commission for Civic Education (NCCE) and funded by the European Union.

The programme aimed at promoting good Governance by reducing corruption and improving accountability and rule of law in Ghana was on the theme ; “A tool for ensuring effective local government concept”.

It brought together, stakeholders from the Ghana Police Service, the Commission on Human Rights and Administrative Justice (CHRAJ, Ghana Health Service (GHS) and the District Assembly.

“In recent times, the high incidents of teenage pregnancy and other social vices including; marijuana spots is a threat to the development of the town”, the Chief emphasized.

“But aside this striking needs, we also have a non-functional water system at our District Hospital and the absence of Fire Service post in the district”, he added.

Nana Nyansaboakwa was optimistic that the social and economic needs of his Town will soon be duly addressed by the Government to raise the living standards of the people.

Mr. Sadique Saeed, THLD District Director of the NCCE explained that the programme, also aimed at promoting community ownership of developmental projects and policies, would increase awareness of the operations of the Local Government system and empower the citizenry to demand accountability from duty bearers.

He indicated that effective local governance system entrusted power and resources to significantly impact the lives of its people through effective policies and projects to make the district vibrant, competitive and secured.

Mr Saeed told them to participate in local governance to build effective society as they demanded accountability from duty bearers.

Mr. Hamidu Munkaila, the Divisional Police Crime Officer for Twifo Atti-Mokwa, assured participants of the Police’s resolute commitment in fighting crime and maintaining law and order and urged citizens to cooperate and support them in their operations.

“The police is your friend, help us for better policing whilst we up our duties in protecting your lives and property and maintain law and order”, he said.

Ms Sakina Amoakwa-Arthur, from CHRAJ charged duty bearers and the people in the area to shun acts that constitute corruption and cautioned people entrusted with power not to use resources meant for the public for their personal gains.

Mr Kennedy Sarpong, The District Chief Executive (DCE) assured that his office would address all the issues raised in the shortest possible time as it did after the last Social Auditing Programme.

The Assembly has set up a five-member Committee to follow up on the concerns raised by the people, notably among them were teenage pregnancies and water supply to the district Hospital, to help address them. He thanked NCCE and pledged his full support for its success.