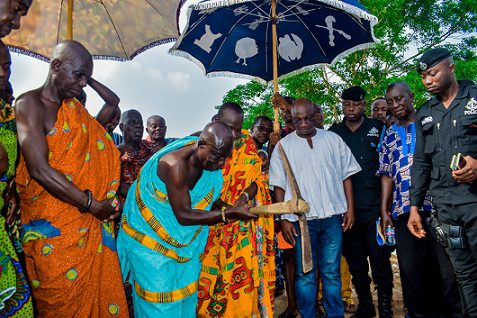 The Member of Parliament for Hemang Lower Denkyira Constituency, Bright Wireko – Brobbey, has cut sod for the construction of a modern district police headquarters to help improve security in the district.

Estimated at more than GH¢1 million, the Hemang Lower Denkyira District Police Headquarters being constructed at Jukwa will help boost the morale of the police in their fight against crime.

Speaking at the sod-cutting ceremony, Mr. Wireko – Brobbey, underscored the invaluable place of security as an indispensable tool for the sustainable growth and development of any community.

This, he said has inspired his ongoing efforts to support local government agencies and the traditional council in Hemang Lower Denkyira to take necessary measures to improve security in the area.

Hon. Wireko-Brobby expressed concern about the increasing crime rates targeting homes and farms, noting the community will need a befitting police headquarters which his office is committed to supporting as a stakeholder complementing government’s efforts in providing security.

He said the need to improve security in Jukwa and surrounding areas features prominently in his agenda to develop the constituency, noting security is a basic human right in this modern world.

Chief of the area Nana Appiakoh who is the Denkyira Gyedomhene thanked the MP for his contributions towards improving security in Jukwa and beyond.

He said the new Police headquarters will go a long way to improve police accessibility and visibility.
“Judging from Jukwa’s crime rate and the lifestyle of the youth, Jukwa really deserves more police infrastructure to complement existing ones. We can only thank our MP for this massive project,” he said.

Chief Inspector Seth Effah Broni who is the Station Officer at Jukwa said there is a need for more police infrastructure to fight crime and improve security in the area.

He lauded the MP for the project and called for the support of traditional leaders in efforts to fight crime.

Architect Arko Eric Kwame of A-ARCH Design and Built Consult, the contractors for the project, assured that the project will be completed in 8 months.

Isaac Ohene Ahunako, a resident of the community expressed his happiness about the project. “You can have the best private security in your house but if you don’t have the police then you are not secured,” he said.