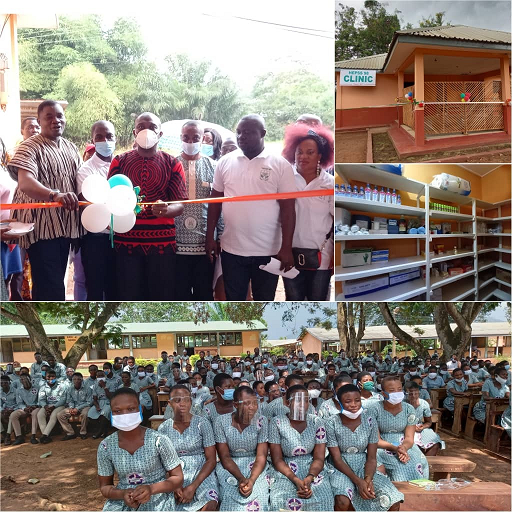 The 1998 year group of the Hohoe Evangelical Presbyterian Senior High School (HEPSS) has commissioned and handed over a refurbished clinic to the alma mater.

The clinic, christened HEPSS’98 Clinic, is stocked with modern equipment, including drug dispensary, a waiting area, male and female wards, washrooms and a consulting room at an estimated cost of GH¢40,000.

Mr Innocent Tsawoe, Chairman of HEPSS’98 Group, said giving back to their alma mater was a burning desire shared among members of the Group.

He said the gesture was one of the many supports the Group had given to the School, including the provision of desks and computers.

Mr Tsawoe noted that although the outbreak of the coronavirus pandemic had slowed down activities across the globe, it also motivated the Group to put up the edifice.

He called on other Groups to emulate their gesture and to support the School.

Mr Tsawoe said the facility would go a long way to bring relief to students and staff since there were no health facilities nearer to help in times of emergencies.

Mr Franklin Amesimeku, Headmaster of the School, said the School appreciated the role played by the various stakeholders at each stage of “birthing this dream into reality.”

He said the School’s Old Students Associations were key players in partnering education and management of the School.

The Headmaster noted that the health needs of the School could not be overemphasized, saying “The provision of a health facility for a student population nearing 3,000 is phenomenal since the primary healthcare need of the student is very important.”

Mr Amesimeku noted that the Group’s immense contributions had led to a huge transformation in the area of accommodation for teachers, provision of poly tanks, television and turbonets.

“While management waits patiently to see the renovation and modernisation of our school’s dining hall by another year Group, we wish to encourage you to continue with bettering the lives of our students.”

He said the School still lacked an assembly hall and fence wall to prevent encroachment on the School lands.

He said it had reduced the burden on health facilities since it was capable of handling first aid cases.

Dr Mensah urged the Group to continue to replenish the facility with the necessary medicines and essentials.

I will respect term limit of my presidency – Akufo-Addo