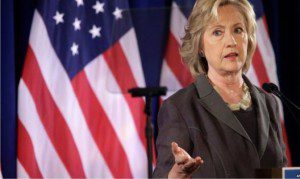 Hillary Clinton has attacked her main rival Bernie Sanders over US gun laws at the Democratic presidential debate.

When asked if the Vermont senator was strong on gun control, she said ?no, not at all? before vowing to go after the makers of guns used in shootings.

His rallies have drawn big crowds and he has challenged Mrs Clinton?s frontrunner status in some key states.

One of the sharpest points of difference between the two main candidates came over gun laws. The hugely divisive issue came back on the agenda after a mass shooting at a college campus in Oregon.

When Mrs Clinton said her rival was not tough enough, she was referring to him voting in 2005 for a measure to give gun manufacturers immunity from lawsuits.

The two also argued over the merits of capitalism, with the former first lady saying it would be a ?grave mistake? for the nation to reject it.

Vice-President Joe Biden is still considering a run for the White House and did not make a last-minute entry on to the stage, as his supporters hoped.

Mrs Clinton has seen her support wane amid questions about her use of a private email account when she served as US secretary of state, a move she now calls a mistake.

However, she was unfazed during the debate when Mr Chafee questioned her credibility over it, refusing to respond when invited.

The candidates tried to draw a distinction with the two Republican debates, where candidates took a tougher stance on immigration and spent more time discussing social issues like abortion and gay marriage.

Mr O?Malley used his 90-second closing speech to say the Republican debates were lessons in intolerance.

But Republican candidate Jeb Bush said he saw nothing on the Las Vegas stage to impress him.

?If you think this country is on the wrong track, Hillary Clinton just told you she has no interest in changing direction. I sure will.?

Fifteen Republicans are vying to be the party?s White House nominee in 2016.

Iowa will be the first state to choose its candidate from each party in February, then other states hold primaries in the following weeks and months.

By next summer, each party will have a presidential nominee who will do battle in the race for the White House.

Votes will finally be cast in November 2016.

Four arrested in connection with attacks on Nkroful Magistrate Court