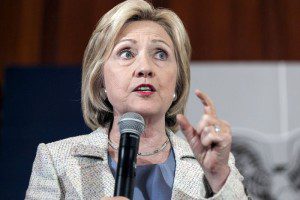 There is a reason Hillary Clinton?s poll numbers show voters think she is untrustworthy: She keeps telling them things that are not true.

On the use of her e-mails, we know the long list of untruths about the private e-mail server and the e-mails, thousands of which were destroyed.

She turned over everything she had. (No, about 15 documents were not given to the State Department.)

She never got a subpoena. (Oh yes she did.)

She did it only for the convenience of using one device. (She had multiple devices.)

The biggest untruth of them all: She followed all the rules. No she did not, The Post?s Glenn Kessler found: ?In reality, Clinton?s decision to use a private e-mail system for official business was highly unusual and flouted State Department procedures, even if not expressly prohibited by law at the time.

Moreover, while she claims ?everything I did was permitted,? she appears to have not complied with the requirement to turn over her business-related e-mails before she left government service. That?s a major misstep that she has not acknowledged.?

There was no classified material. (Actually, an inspector general says there was.)

Now two inspectors general are suggesting a probe. And let?s be clear ? this is about her conduct. The Hill reports:

Two government watchdogs at the center of an investigation over Hillary Clinton?s personal email server say she shouldn?t have sent classified information over her private system while serving as secretary of State.

Perhaps the Justice Department will look the other way. Perhaps she will be exonerated. But let?s recall she is running for the presidency of the United States. The bar for that must be more than ?didn?t do enough to justify prosecution.? For starters, she has misled the American people over and over again. Do we believe anything she has to say on the subject? Moreover, she did not protect the nation?s secrets as she was obligated to do.

For whatever personal motive or just through sheer negligence, she put the country at risk. This is not the conduct of someone fit to be president.

Ron Fournier observed, ?Most people can sift through the spin, the lies, and the parsing to see the bottom line: She secreted and deleted her email for reasons we may never know. And she?s blaming everybody but the only person responsible for this mess, the only person who can clean it up: Hillary Rodham Clinton.?

It is not yet clear whether Democratic primary voters want to ?see the bottom,? but the country as a whole is telling Democrats this is not someone whom they trust with the presidency.