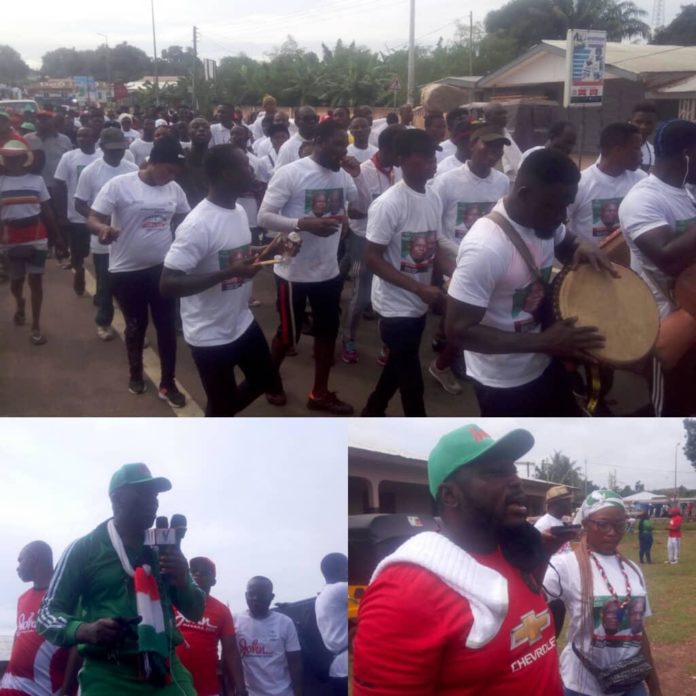 The Ho Central National Democratic Congress (NDC) has organised a health walk to keep members of the party active ahead of the December polls.

He said the party had series of activities to be carried out before the polls, which included health walk, clean up exercises, manifesto launches, health, and educational programmes, all aimed at canvassing for votes for the party to secure the victory they had been yearning for.

The Chairman urged the electorates to vote for the NDC to come back to power to continue with its good policies and programmes, which were tailored at enhancing the socio-economic development of the country and improving the standard of living of the populace.

Mr George Opare Addo, National Youth Organiser of the party said the Party’s manifesto reflected the aspirations of the youth in the country and therefore called on them to vote massively for the party to win and promote their well-being.

He said the next NDC led government would create a Ministry of Youth Development, which would ensure that all challenges bedeviling the development of young people in the country were addressed to create the needed atmosphere for them to advance in life to become responsible future leaders.

Mr Addo said the party would support and create an enabling environment for private enterprises in the country to flourish so they could help solve the unemployment situation by employing more people in their business.

Mr Benjamin Komla Kpodo, Member of Parliament (MP) for Ho Central urged the people to come out in their numbers to vote for John Dramani Mahama and the parliamentary candidates of the party for a positive change.

Mr James Gunu, Volta Regional Secretary of the Party was optimistic that the party would come out victorious in the December elections and urged party faithful to rally behind the leaders to bring victory to the party.