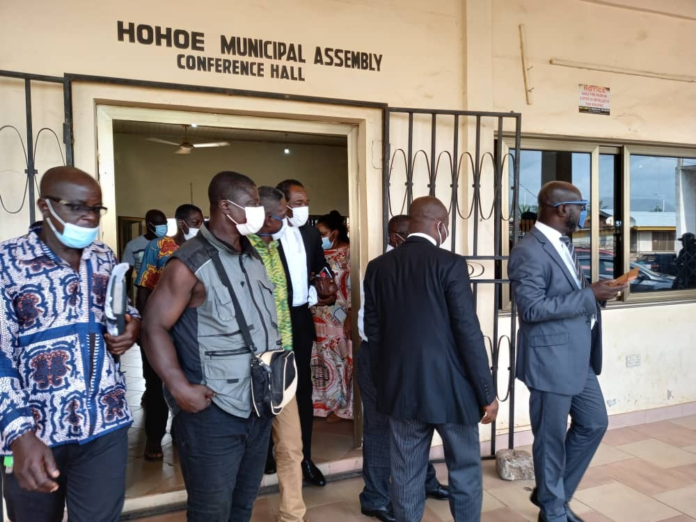 A Hohoe High Court, on Wednesday, adjourned sine dine a case before it seeking to place an “order of perpetual injunction” restraining Mr Kofi Adams from presenting himself to be sworn-in as MP-elect for Buem or holding himself as such.

The decision by the Court was as a result of failure on the part of applicants to effect service on Mr Kofi Adams, the first Respondent.

Mr Frank Davies, Lawyer for the petitioners, who spoke to the Ghana News Agency (GNA) after court proceedings, explained that the case had been adjourned indefinitely “because the Court directed that service should be effected on Kofi Adams, MP elect for the Buem Constituency.

“The applicants were unable to serve him, so the proceedings for today have been stultified. We will attempt to serve him and come.”

He said the petitioners would come back to court when they were able to serve him.

Lawyers for the first Respondent and the second Respondent were not in court.

The GNA has gathered that the Electoral Commission, second Respondent were however served.

Some 13 voters from the Oti Region have sued Kofi Adams, National Democratic Congress (NDC) Member of Parliament-elect for the Buem Constituency and the Electoral Commission (EC) in a Hohoe High Court for excluding them from the December 7 Parliamentary election.

The 13, who are residents of Santrokofi, Akpafu, Lolobi and Likpe (SALL), filed a suit at the Hohoe High Court challenging the election of Mr Adams.

The petitioners in their suit argued that they were disenfranchised as the EC failed to hold the parliamentary election in the 13 electoral areas where they were expected to exercise their franchise.

They are therefore seeking an “order of perpetual injunction restraining Mr Kofi Adams from presenting himself to be sworn-in as MP-elect for Buem or holding himself as such”.

The petitioners are also seeking a cancellation of the December 7, parliamentary election organised by the EC in the Constituency, and the conduct of a new one to include the 13 electoral areas which will allow them to cast their ballots.

There were heavy security presence at the improvised Court as the main Court was under rehabilitation.