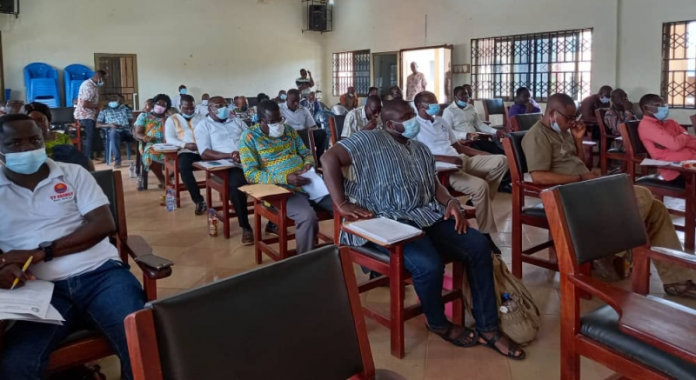 The Hohoe Municipal Assembly has been adjudged the overall best performing Assembly out of 18 Municipal and District Assemblies in the Volta Region in 2020.

Mr Andrews Teddy Ofori, the Hohoe Municipal Chief Executive (MCE) addressing the first ordinary meeting of the second session of the eighth Hohoe Municipal Assembly, disclosed that 96 per cent of programmes and projects contained in the Annual Action Plan (AAP) for 2020 were implemented by the Assembly.

He said the Assembly had also developed an interactive website (www.hhma.gov.gh) to promote e-governance in the Municipality.

The MCE disclosed that the Assembly was expecting an Urban Development Grant (UDG) of GH₵ 8,342,009.71 under the Ghana Secondary Cities Support Programme Two, which is intended to implement priority projects and programmes to promote urban economic development.

He said some of the projects to be executed were the construction of a second phase two-Storey Hohoe market complex with 98 lockable stores, 16-unit warehouses and provision of 32 security lights.

The MCE said, “there is no gainsaying the fact that the Municipal Security Committee (MUSEC) under my leadership has been on top of its mandates to provide reliable security to the good people in the Municipality.”

Mr Ofori said since there was the need for more to be done to sustain the gains achieved so far in the Municipality, management of the Assembly had outlined activities for 2021 and beyond to be implemented, which included intensification of daily and night patrols in all communities in the Municipality.

He said there was also the need to encourage security awareness of the various communities through neighborhood watch committees and called on the Assembly members to spearhead.

The MCE also said management had also lobbied central government and benevolent organisations for a patrol pick up the vehicle for the Municipal Police Office for their monitoring activities.

He also disclosed plans to construct a permanent office to accommodate the Municipal Police Headquarters, which would “find space in our 2022 budget.”

The MCE said his administration would continue to focus on deepening good administration, governance and security, and enhance public service delivery as a means to promote growth and safety in the Municipality.