The novel coronavirus, or COVID-19, now sweeping the globe, can boast of its latest casualty: Hollywood.

Responding to the new state of emergency that was declared by many U.S. states as well as on the federal level by the Trump administration, Hollywood’s Big Six studios shuttered production on all films and television series in the pipeline. Virtually all production – from big studios to smaller independent films – ground to a halt late last week and this week, as the American film and television industry braced to do its part to contain and ride out the coronavirus outbreak.

Hollywood producer, Arthur Sarkissian, told Xinhua on Friday that public health and safety had to come before economic considerations. “As in other businesses, the entertainment industry will be affected… but right now everyone must face one thing first – that is the dealing with the virus,” he said.

Film and some television productions often employ hundreds of people, from the highly paid, above-the-line creatives, including actors, director, writer, and producers on down to the rank-and-file, below-the-line artisans and crewmembers who work on location and in the editing bays after the film has been shot.

Emmy Award winning producer, Jeff Most, told Xinhua that he lamented the production shutdowns, “but, we have to look out for the safety not only of our executives and everyone in front of and behind the camera, but for everyone in society that we must protect in every way possible by not congregating on film and TV productions.”

As production shuttered in the United States and Europe and Trump cancelled all flights from Europe, Most narrowly escaped being stranded in Germany while his wife, Katy, is nearing her delivery date on their first child back in Los Angeles.”Our baby is by far our most important co-production, so I couldn’t miss it!” Most quipped, arriving back in LA.

Among the bigger production closures hitting Hollywood, Marvel and Disney Plus were one of the first to sideline their superheroes. Marvel halted production on Scarlet Johansson’s “Black Widow” film featuring her popular Avenger character. They also tabled their China-centric, “Shang-Chi and The Legend of the Ten Rings.”

Disney Studios sunk their live-action, “The Little Mermaid,” as well as their family classic, “Peter Pan & Wendy,” and rescheduled reboots of earlier family hits, “Shrunk” and “Home Alone.” Disney Plus iced their new series, “The Falcon and the Winter Soldier,” currently being shot on location in Eastern Europe; plus, “WandaVision” and their bad-boy, demi-giant, trickster series, “Loki.”

Warner Brothers’ “The Batman,” which went into hiatus while their massive production shifted from a London-based sound stage to one in Liverpool. Universal Pictures’ London-based production of “Jurassic World: Dominion,” the third installment of the Chris Pratt-starring franchise, also hit the boneyard.

No good deed goes unpunished, as MGM’s Sylvester Stallone vehicle, “Samaritan,” shooting in Atlanta, was shuttered for at least two weeks. Jason Statham left the production of Kevin Hart’s action comedy, “The Man from Toronto,” on March 10, and had just been replaced by Woody Harrelson when the production postponed the start of principle photography.

Baz Lurhmann’s “Elvis Project” halted production in Australia when co-star, Tom Hanks, and his wife, tested positive for the coronavirus. The seventh installment of Tom Cruise’s blockbuster “Mission Impossible” franchise, set to shoot in Venice, Italy, went dark when the entire country went into lockdown due to the devastating impact of the coronavirus there. To date, Italy is one of the countries hardest hit by the virus in Europe.And Antonio Banderas, fresh off his award season run in 2019 for “Pride and Glory,” had to postpone his and Penelope Cruz starrer, “Official Competition,” that had been set to shoot in Spain.

One of the lone holdouts, Warner Bros. “Matrix 4” has not declared a production hiatus yet. Since it is shooting on a closed sound stage in Berlin, Germany, they opted to amp up their safety protocols for the time being instead of shutting down production entirely. On the television side, Disney is also putting 16 pilots on ice that had been slated for production across its various subsidiaries, while Warner Bros. Television Group temporarily pulled the plug on over halted 70 TV series and new pilots, and Netflix shuttered all their scripted film and television production in the United States and Canada.

Fellow networks, cable-nets and streamer, ABC, NBC, CBS, FOX, TNT, CW, FX, HBO, Oprah Winfrey Network (OWN), Amazon, Showtime, Lifetime, Hallmark and others, are also closing their doors and will remain in limbo until they reassess the situation in two weeks’ time. “We are going home now for at least two weeks and waiting to see how the coronavirus situation evolves,” hit show, “Grey’s Anatomy” executive producers, Krista Vernoff, Debbie Allen and James Parriott, told their cast and crew.”This decision was made to ensure the health and safety of the whole cast and crew and the safety of our loved ones outside of work, and it was made in accordance with Mayor Garcetti’s suggestion that we not gather in groups of more than 10,” they explained in a letter.

PBS’s “Closer to Truth” opted to keep working but go virtual. “All staff is working remotely and by teleconferencing,” writer/producer/on-air host, Robert Lawrence Kuhn, told Xinhua. “We want, first, our ‘Closer to Truth’ family to be safe, and second, to alleviate their anxiety, which undermines creativity!” 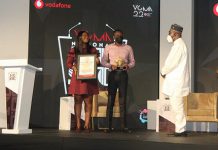