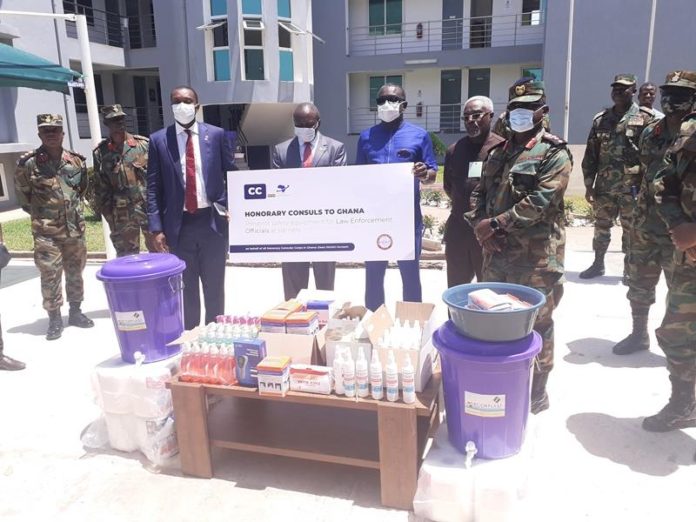 The Honorary Consular Corps of Ghana on Thursday presented safety equipment to the Ghana Armed Forces (GAF) and the Ghana Police Service (GPS) to assist them in their line of duty against the spread of the Coronavirus (CONVID-19).

Mr Hilton John Mitchell, the Honorary Consul of the Republic of Trinidad and Tobago, presenting the items on behalf of the Corps, said the gesture was to equip the law enforcement officials in executing their duties at the various checkpoints in the wake of the partial lockdown.

He commended the security agencies for ensuring orderliness during the restriction of movement of persons in keeping the country safe and sound, urging the public to cooperate with them to make their work easy.

Mr Thomas Okyere, Botswana Honorary Consul, said the gesture was also to sensitize the public that the COVID-19 pandemic was real, and implored all to adhere to the precautionary measures announced by the Ghana Health Services, especially, regular handwashing with soap under running water and maintain social distance.

Major General Thomas Oppong-Peprah, the Chief of Army Staff, who received the items on behalf of GAF commended the Corps for the kind gesture and pledged to distribute the items to the officers at the barriers for their safety.

DCOP Samuel Monney, the Director-General in charge of Technical Services, GPS expressed profound appreciation to the Corps for responding to their safety needs, urging other corporate organizations to support the security services to discharge their professional duties to the nation.