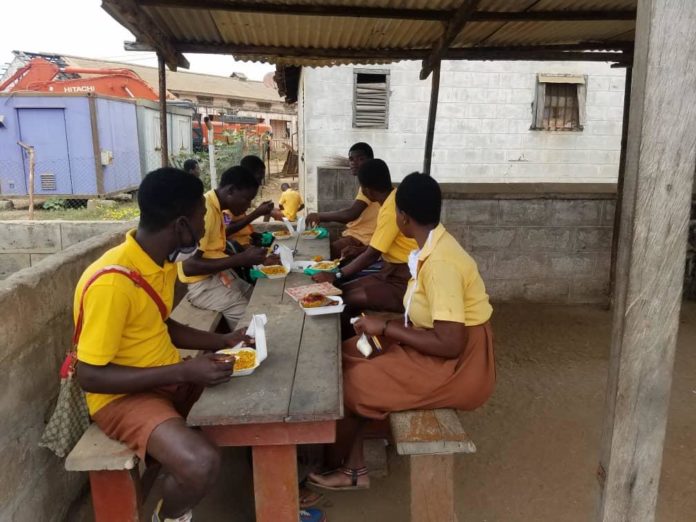 Barley 48 hours of the commencement of President Nana Addo Dankwa Akufo-Addo’s directive for one hot meal to be provided for all Junior High School (JHS) students and staff, attendance in the academic city of Cape Coast has increased dramatically.

Authorities at some selected schools visited by the Ghana News Agency on Tuesday stated that students’ lackadaisical attitude, some of them from poor homes and communities had changed, and they appear more confident and determined to succeed.

President Akufo-Addo’s 15th address to the nation disclosed that he had instructed Mrs Cynthia Morrison, Minister for Gender, Children and Social Protection, to begin the necessary preparations of making one hot meal available to all final year JHS students and staff.

The measure, expected to be in place for close to one month, is to be observed under “full compliance of the Covid-19 safety protocols” by both students and staff.

At Bakatsir JHS built in 1959, the authorities who spoke on condition of anonymity described it as excellent, adding that three seriously truant students had returned to school because of the free food.

“All the 22 final year students are here and have finished eating their banku with stew and fish. Even some three truant students who have refused to be in school after all persuasion have amazingly returned to school. The children are happy and I am happy as well,” a teacher said.

The practice of teachers organizing food for some students from deprived homes to retain them in school is over, the teacher said, adding that “teachers can now save such money and invest into something else to improve themselves.”

For the school authorities, the move was one of the important government initiatives to encourage needy children to go to school, knowing there will be at least one nutritious meal a day.

Giving testimonies of the intervention, she stated that: “Some students went home to inform their truant colleagues about the intervention and for once, all my students are present. They appear happy and hopeful and we hope the intervention will be sustained to shore up students enrollment and retention.”

She commended government for its efforts and noted that the specific policy objectives were that school feeding efforts would seek to improve school enrolment, attendance and retention among students.

Among others, Madam Cromwell described it as a strategy to significantly support the education of children from deprived communities.

At Jacob Wilson Sey JHS, a total of 32 final year students made up of 15 boys and 17 girls, manned by eight teachers had just fished taking their meal with some washing their hands when the GNA arrived.

The School was particularly happy with the timely delivery and serving of food, which did not interrupt any academic work and called for water to be added to the food package.

Some children in an interview with the GNA described their gari and beans with fried plantain, jollof and egg or banku with pepper and fish as very delicious and of quality standard but said the quantity was not enough.

A 15-year-old boy at Jacob Wilson Sey JHS who vigorously rolled his tongue in the mouth beaming with infectious smiles of hope, commended President Akufo-Addo for the bold decision saying, “it feels good to be a JHS student at this time.

Others students also hailed the President for the privilege and prayed for it to be sustained to improve enrollment, retention and effectively improve the nutritional content of students to grow healthy.

Madam Rita Boakye, a Caterer who had just delivered the food at St Augustine’s JHS, praised the government for the initiative, noting that it will also foster local economic development.