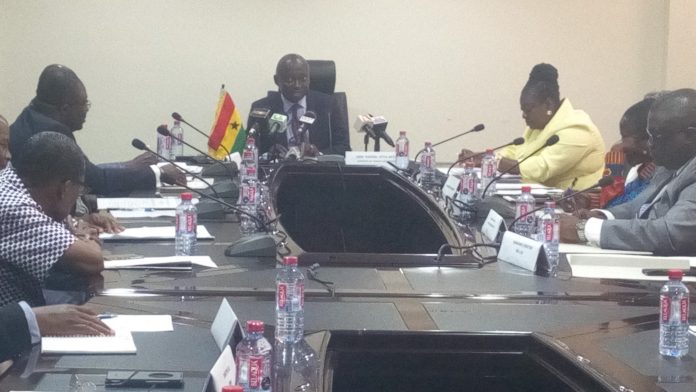 The Minister for Works and Housing, Hon. Samuel Atta Akyea, who is also the MP for Akim Abuakwa South constituency, has said Government is determined to address the housing deficit in the country through partnerships with the private sector in the provision of affordable housing units of different typologies, to meet the demands of Ghanaians.

According to the Minister, looking at the current living conditions of the majority of the population falling within the lower income bracket of the society, which could not mobilise the savings or credit to build their own homes or even meet the high rental demands of landlords and ladies, the Government would partner with the private sector in order to provide the society with such basic necessities of life.

He however noted that, the Government alone could not overcome this problem, especially in the face of the increasing population growth, therefore, it was adopting a two-pronged approach to mobilise funds, both domestically and internationally, to help resolve the housing challenge.

“The Ministry is implementing the Affordable Housing Programme, aimed at providing adequate and decent housing, particularly to the low and middle-income groups.

Recognising low income levels as a challenge on the demand side of housing in Ghana, our focus, therefore, is how to make housing affordable.

To achieve this goal, we are adopting cost saving technologies and new techniques of construction as well as innovative mortgage financing,” Hon. Atta Akyea disclosed.

He further explained that, in an attempt to boost the housing industry, Government would put in place some regulatory framework and adopt a number of policies with the overall objective of creating an enabling environment for the private sector to play a leading role in the delivery of housing units to the populace.

Following this, he said, the Government launched the National Housing Policy in March last year, aimed at improving access to land with good title for housing, outlined strategies for increased production and usage of local building materials, as well as establishing a National Housing Fund and Housing Authority to fast-track the process.

On real estate agency, he said, a draft policy paper was ready for Cabinet approval, which would lead to the establishment of a Real Estate Agency, to regulate real estate agency practice and commercial transactions in real estate including the sale, purchase, rental and leasing of real estate and related fixed assets.

As part of government’s efforts to curbing the rampant encroachment and illegal acquisition of its landed properties, the sector Minister said, the Ministry had secured a grant from the Japanese Government’s Counter-value Fund to create a database with digital images of all government landed properties, using Geographic Information System.

Adding that, a register of government office buildings and residential accommodation had been created in the Greater Accra Region as the pilot phase of the project, which would be replicated in the other nine regions.

Currently the country has more than 1.7 million housing deficit, which has resulted in many socio-economic challenges resulting in upsurge of slums in the cities.

He was speaking at the celebration of the 2017 World Habitat Day, dabbed ‘‘Housing Policies; Affordable Homes.’’ And the day is observed by 192 countries affiliated to the United Nations.

This year’s World Habitat Day celebration he said, coincided with the First Anniversary of the New Urban Agenda adopted in Habitat lll in Quito, Equador.