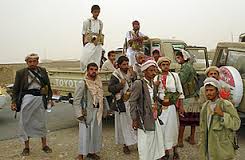 A source told dpa the Shiite movement’s fighters had taken control of entrances to Hudeida port and surrounded the city’s airport.

The development came a day after the rebels welcomed the appointment of Yemeni UN envoy Khaled Mahfouz Bahah as prime minister-designate.

Under a UN-brokered deal signed after the rebels took control of Sana’a on September 21, Houthi camps and checkpoints around the capital are to be dismantled with the formation of a new government.

The movement, whose power base is in the far-northern province of Saada, insisted on having an outlet to the sea.

The rebels seek to revive the Zaidi Shiite traditions of Yemen’s historically dominant northern highlands. They also want revisions to a planned division of Yemen into six federal states.

The plans adopted by President Abd Rabu Mansour Hadi earlier this year would put Saada in a landlocked federal province along with the capital, split off from other northern provinces where the Houthis are influential.

Crowds took to the streets of Yemen’s second city, Aden, to call for the restoration of the formerly independent state of South Yemen.

A Houthi delegation was due to attend the demonstration, despite fears among some southerners that their arrival might expose the protest to attacks from the Yemeni branch of al-Qaeda, which has increasingly targeted the Shiite rebels.

A September peace agreement is due to bring both the Houthis and the secessionist Southern Movement into government for the first time.
GNA