News Ghana
Home Sports How Ghana fared against its opponent-Libya 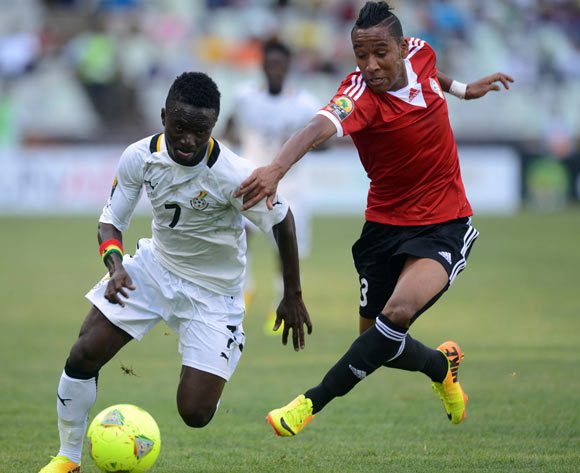 Richard Mpong in action for Ghana against Libya.

MTNFootball looks at how the Black Stars performance in their 1-1 draw with Libya?s Greens in the 2014 CHAN Group C tie at the Free State Stadium in Mangaung on Friday.

The Aduana Stars shot-stopper appeared uncomfortable dealing with aerial balls in the early stages but discovered his confidence as the tie wore on.

He pulled a top-class save to deny the opposition the leveller in the latter stages of the first-half and was also on hand occasionally to help Ghana maintain their lead.

One of the brightest spots in the Ghana team, Saka?s bursting move to inject more venom into the Ghana attack was instrumental for Ghana.

Defensively disciplined and won most of the challenges he went in for.

He stuck to his traditional role of holding the fort at the back.

The Hearts of Oak center-back gifted Libya the leveller when he brought down Mohamed Ghanudi inside the area in the 72nd minute.

Apart from this howler, he was good in the air and provided a strong anchor for the defence.

Did well to provide the crusting backing in defence. His tackles were crucial and most impressive.

He had a normal day.

The 28-year-old enjoyed his first start at the tournament after coming in as replacement for the hamstrung Jackson Owusu.

He was the cover the center-backs needed and linked up well for the midfield and defence.

His vision in the vital area was good for the progress of the team?s build-up play.

The captain propelled the team well though he was sometimes missing in the vital area.

He played well and supplied energy to the team.

Slippery on the flanks and skillful. The 24-year-old time his runs well and made sure the Libyans think about their backs anytime they decided to move forward.

The Medeama man was withdrawn due to injury but before he exited, he was a brilliant player on the pitch.

He knew when to run into space and produced great telepathy with the rest of the midfield.

He was influential and great in the middle. Scored Ghana?s goal with a world-class header.

Won the man of the match of the game award with his impressive work.

Couldn?t complete the game due to an injury. Not much was seen from the King Faisal striker.

He came on early in the first half after Sulley Mohammed?s injury but very little impact in the game.

The youngster was thrown on in the 84th minute but never settled down. He is struggling to find his feet at the tournament.

He came on for Theophilus Anobaah on 55 minutes and was tasked to run down the flanks. The AshGold man did a few but was far from impressive.