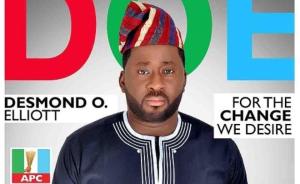 It seems some people want to derive joy in seeing talented Nollywood actor, Desmond Elliot, growling in anguish. Or how would one describe the rumour that emanated last week that the actor turned movie director was shot by some gunmen?

Recall that the handsome silver screen star picked the ticket of the All Progressives Congress (APC) to contest for the Lagos State House of Assembly election in 2015.

The rumour caused panic among his fans, colleagues and others, who were worried about his welfare.

But reacting to the speculation, Desmond Elliot?s publicist, Mr. Tunde Moshood, said the actor was hale and hearty.

Mr. Moshood quoted the actor as saying the rumour was the handiwork of his detractors.

?Please help me tell my fans that I am hale and hearty and nothing shall be wrong with my soul in Jesus mighty name. It is the handiwork of my detractors,? Desmond was quoted to have said by Mr. Moshood.

Some have already started asking ?who wants to hurt the actor?? Others have even asked if the rumour was politically motivated.