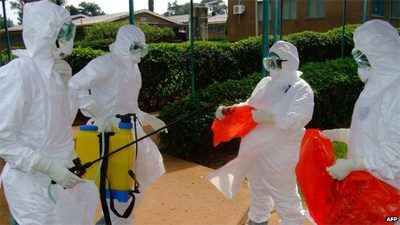 Announcing this in Abuja, the Minister of Health, Prof. Onyebuchi Chukwu, said the patient was subjected to thorough medical evaluation where laboratory investigations were also carried out and his blood sample taken to the advanced laboratory at the Lagos University Teaching Hospital, LUTH, WHO reference laboratory in Darkar Senegal and CDC laboratory in Atlanta, USA, which confirmed the diagnosis of Ebola Virus Disease.

It will be recalled that the confirmation of the outbreak of the virus in Lagos on Thursday, July 24 by the Lagos State Ministry of health caused panic across the country.

This was after Nigerians were alerted on 22nd July, 2014, on a suspected case of Ebola Virus Disease, in Lagos involving a 40-year old man travelling from Monrovia, Liberia to Nigeria on Asky Airline via Lome to Lagos.

The passenger was said to have fever, and vomiting with diarrhea on arrival at the airport and was handed over by the airline to the Port health Services of the Federal ministry of Health, who quickly isolated him and transported him to the hospital to avoid contact with the general public.

But after the confirmation of the results by other laboratories outside Nigeria and despite the urgent specialized barrier nursing care provided for the patient in a Lagos Hospital, the patient unfortunately passed away in the early hours of Friday.

As part of effort to contain the spread of the virus, the health Minister said certain measures had already been taken by the Ministry, which include: tracing and investigating all the passengers the patient came with; placing all ports of entry under red alert in line with WHO regulations; equipped all government tertiary health institutions in Nigeria to handle any emergency that may arise from the disease and providing supportive drugs and medical consumables at all entry points and stepping up collaboration with all the States of the federation.

??I want to assure the general public that the FMOH is presently working with other ministries, agencies and international organizations as well as the Lagos State Government to prevent the possible spread of the virus.

??Emergency operation centres had been established and coordinated by the Nigeria Centre for Disease Control, NCDC of the federal Ministry of health in collaboration with an inter ministerial committee set up by the President,?? he added.

The committee according to him, is headed by the Minister of Information, Mr. Maku , set up to stimulate sensitization of the Nigerian public on the danger and preventive measures on Ebola Virus disease.

He implored all citizens to be vigilant and ensure improved personal and environmental hygiene and to report any suspected case to the nearest medical facility.

While stressing the need for citizens to be vigilant and sensitive about the virus, the Minister also said every needed measure to control the possible spread of the virus had been taken by the Ministry and urged Nigerians to remain calm.

Also speaking on the development, the Minister of Information, Mr. Labaran Maku said jingles and other awareness programmes had been prepared by his committee to help spread the awareness in the conventional media and social media.

He however, appealed to all media outfits to support government effort in curbing the spread of the virus by airing the jingles and other programmes lined up free of charge.

??This is a national emergency and so, I expect no demand for payment from any media to air the jingles and programmes prepared by the centre and Presidential committee on Ebola virus.??