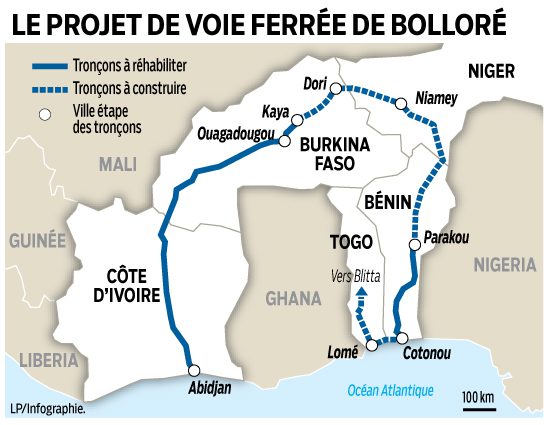 The Blueline rail project would involve all countries in the region, except Ghana

French billionaire Vincent Bollore has hired banks to prepare for a Paris listing of his West African train project in the first half of 2016, three sources close to the process said, helping to cover financing costs.

The West Africa rail loop, commonly known as Blueline, will connect Ivory Coast, Burkina Faso, Niger, Benin, Togo and Nigeria. The project was launched in 2013 and is expected to be completed in the next eight years at an estimated cost of between 2 billion euros ($2.21 billion) and 2.5 billion euros.

At least four banks, Goldman Sachs, BNP Paribas, Societe Generale and Credit Agricole have been mandated to start work for a potential listing, the sources said.

The initial public offering (IPO) could raise up to 500 million euros, a banker familiar with the project said.

Other sources, however, said it was too early to give a precise figure as the details on how much cash will be raised and what assets will be included in the listed company have yet to be ironed out.

“We are looking at all possibilities to move forward to put together the right financing. Until now we have always been progressing on our own funds,” said Eric Melet, chairman of Bollore Africa Railways, a subsidiary of the Bollore Group.

“In any case, we want to be in control and we will definitely provide a significant part of the financing.”

Bollore has a history of taking projects to market early in their development. In 2013 he listed electric car battery company Blue Solutions, with the main objective of floating 10 percent of the business being to raise awareness rather than money.

The Bollore group has been present in Africa for more than 50 years and has rail concessions in Cameroon through Camrail, Ivory Coast through Sitarail and was recently awarded one in Benin through Benirail. About 22 percent of last year’s group revenue came from African operations.

More than 70 percent of the rail loop’s revenue is expected to come from cargo, with the remainder derived from passenger fares.

Colombian finance minister steps down in wake of protests