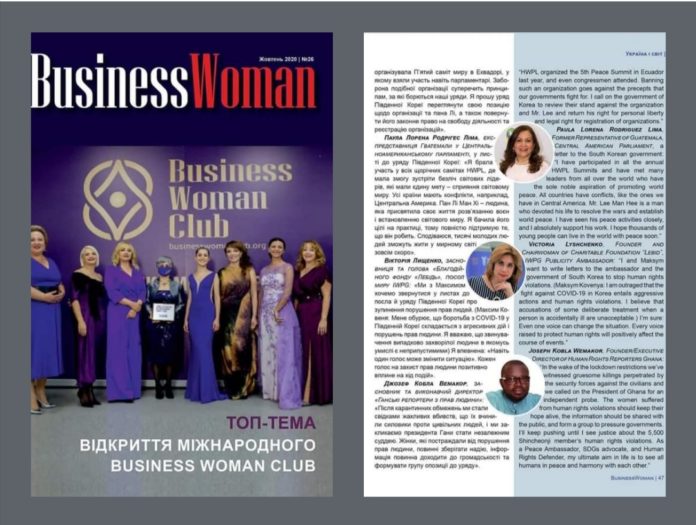 The publication which appeared in a quote vividly captured alongside with the finest photograph of the Human Rights Reporters Ghana’s boss on the 47th page of the latest edition (26th version published on October 17, 2020) of the popular glossy ‘Business Woman Club’ magazine read:

“In the wake of the lockdown restrictions we’ve witnessed gruesome killings perpetrated by the security forces against the civilians and we called on the President of Ghana for an independent probe.

The women who suffered from human rights violations should keep their hope alive, their information should be shared with the public, and form a group to put pressure on governments.

I’ll keep pushing until I see justice for the 5,500 Shincheonji member’s human rights violations. As a Peace Ambassador, SDGs advocate and Human Rights Defender, my ultimate aim in life is to see all humans in peace and harmony with each other”.

Mr Wemakor, a dynamic journo, a staunch human rights activist who also doubles as a women’s rights advocate quote appeared alongside hosts of other world’s powerful geniuses including the likes of Victoria Lyschenko, Founder and Chairwoman of Charitable Foundation “LEBID”, IWPG Publicity Ambassador,

The Business Woman Magazine is a tool used for amplifying the voices of the members of the Business Woman Club, a closed women’s business club that brings together successful women in business for consolidation, development, communication and cooperation.

Proudly owned by a successful business woman Anna Krysiuk, who doubles as the founder and president of the closed women’s business club, Business Woman Club, the glossy magazine covers areas in life of a person – from business news to politics, governance, social issues, and critical human rights issues among others.

The Human Rights Reporters Ghana (HRRG) is a media advocacy human rights non-governmental organization (NGO) made up of journalists, news editors, lawyers and human rights activists who have passionately dedicated their efforts to protecting human rights and ending human rights abuses against people particularly women, girls and children including the minority groups and persons with disability who are the most vulnerable in our society within Ghana and beyond.

The group has been tremendous in its advocacy role to bring down burgeoning issues of human rights abuses to ground zero in Ghana and beyond especially during the lockdown restriction era where a lot of atrocities were committed against civilians by the security officers deployed to enforce directives.

It has equally been an active voice to the plight of the over 5,500 cases of human rights violations including coercive conversion which have been reported since the outbreak of the novel coronavirus in South Korea, many of which are women. This has been made possible under the leadership of Mr. Joseph Kobla Wemakor

HRRG came to the spotlight with its Nationwide Sensitization Campaign Project on Kidnappings, Teenage Pregnancy and Tramadol Abuse (KTT Project) which contributed significantly to reduction of all forms of social vices in Ghana.

Ghanaian rights activist to speak among acclaimed activists at a global conference on SDGs, Agenda 2063

Justice for Lilian & Yesutor: HRRG calls for end to violence against women