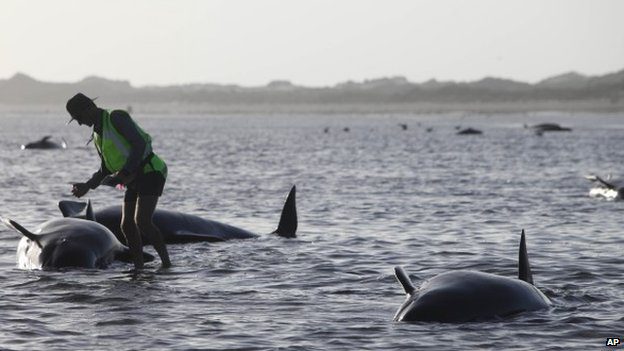 Three humpback whales have been spotted in a river inhabited by crocodiles in Australia’s Northern Territory (NT).

It is the first time that humpbacks have been spotted about 20 kilometers upriver in Kakadu, said the Australian Broadcasting Corporation.

The whales — two adults and a large juvenile — were first spotted in the East Alligator River in the Kakadu National Park on Sept. 2.

Carol Palmer, a senior scientist at the NT Department of Environment and Natural Resources, said it was a mystery how the whales ended up in the river.

Humpback whales normally migrate back to Antarctica in September as the southern hemisphere enters the warmer months of the year.

“It’s never occurred before, we’ve had no records of this in the past,” Palmer said.

“We’ve collaborated with the traditional owners of East Alligator River, and they’ve also never seen humpback whales in any of the alligator rivers.

“How it has ended up in the river, no one can be certain. It sort of feels like they’ve just made a wrong turn.”

Authorities have established a 30 kilometer (km) exclusion zone for boats in the river to protect both vessels and the whales.
The river is infested with crocodiles but experts say they do not pose a threat to the whales.

Palmer said that if the whales do not leave the river, authorities may try to push them out to sea.

“They’re about 20 km up the East Alligator, and they’ve picked a spot where there’s still water even when it’s a low tide. But it is, from all that we can gather, quite shallow,” she said.

“It’s a very tricky place they’re in, but they look okay.”

Lands Ministers To Appear Before Parliament Over Galamsey Fight