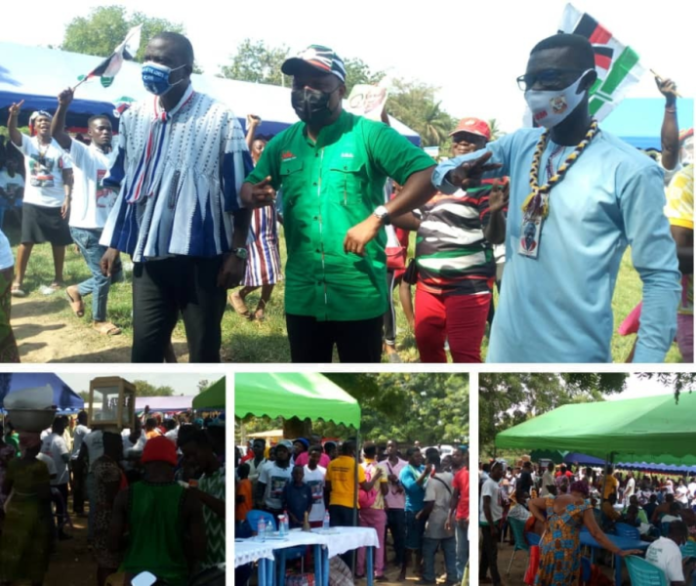 Residents of North Tongu turned up in their numbers to listen to all three persons asking for their mandate to represent them in Parliament.

The large crowd watched with excitement as Parliamentary Candidates (PCs) of the New Patriotic Party (NPP), the National Democratic Congress (NDC) and the Ghana Union Movement (GUM) state their cases as the best candidates deserving to be voted for as the next Member of Parliament (MP).

Tuesday’s parliamentary debate organised by the Inter-Party Dialogue Committee and the National Commission for Civic Education was to allow for engagement between the constituents and the PCs, saw NPP and NDC PCs try to undo each other regarding who and which government did better for the people of North Tongu.

The two main contenders, touted their interventions in areas including agriculture, education, health, jobs, road infrastructure, youth development and improving the livelihood of Persons with Disability (PWDs) and the vulnerable in society and, their plans to improve on them when given the nod.

Mr Collins Arku, the NPP PC, doubling as the Chief Executive of the District, said just as the current government had initiated policies and programmes which improved lives of PWDs, the vulnerable, farmers and unemployed graduates in North Tongu, his tenure as MP would see a continuation for more development and jobs.

He said these would be achieved through providing free vocational training to constituents, advocating for the establishment of a College of Education, an industrial park, landing sites among others to serve the interest of all.

Mr Samuel Okudzeto Ablakwa, the NDC PC and incumbent MP, said his good works in jobs creation, commitment to education, health delivery, welfare of the vulnerable and PWDs, and infrastructure development were there for his people to see saying, it was not for nothing that he was installed Togbe Worgbedzi I (Promise Keeper).

The former Deputy Minister and current ranking member of Foreign Affairs Committee promised that when given the nod, the Volivo Bridge and the Aveyime-Asutsuare Road would be completed in his first year as a USD120 million fund had already been sourced for that.

He promised to expand his Free Hospital Bill Project to cater for more underprivileged people, revive the Aveyime Rice Factory and the Juapong Textile Company for jobs, lobby for a new technical tertiary institution and ensure that North Tongu had its fair share of the NDC’s People’s Manifesto.

Rev Raymond Akaho, GUM PC, said he would prioritise technical and vocational training, lobby for the establishment of an agricultural university to improve agriculture production in the agrarian Constituency to provide jobs, institute a pension scheme for workers in the informal sector for their wellbeing and give interest-free rate on loans below GHC2,000.00 to constituents.

He said these policies in addition to revamping collapsed factories, would tackle poverty and its attendant implications of divorces and teenage pregnancies in the area noting, when the people were well-fed and had money, they would willingly contribute to the progress of North Tongu.