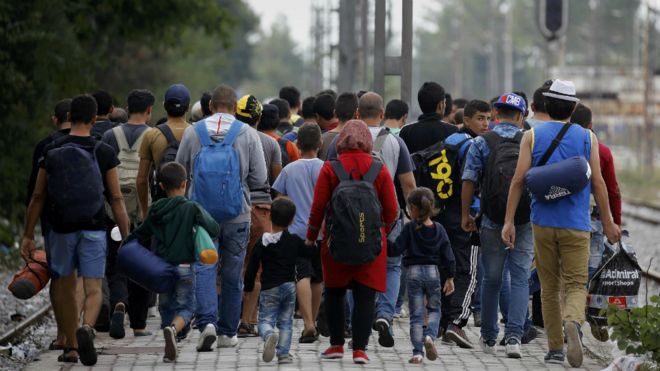 Hungary?s prime minister says tens of millions of people could descend on Europe

Mr Orban said supporting Turkey, Lebanon and Jordan with such a package would end the mass migration to Europe.

Hungary has struggled to cope with some 150,000 migrants that have crossed its borders so far this year.

From next week, people who enter the country illegally will be arrested.

Meanwhile, protests in support of migrants are expected across Europe later on Saturday.

Ten of thousands of people are expected to participate in a ?day of action? with dozens of events taking place in several countries.

A handful of rival anti-migrant protests are also due to take place.

Meanwhile, Germany has announced that 4,000 troops have been put on standby to cope with the huge influx of migrants.

Officials say 40,000 people are expected to arrive in southern Germany this weekend alone ? twice as many as last weekend.

In an interview with Germany?s Bild newspaper (in German), Mr Orban said the ?3bn fund could be raised by every EU country paying an extra 1% into the budget ? or by a general reduction of EU spending by 1%.

?We have a plan, which I will submit to the EU at our next meeting,? he said. ?It means that we support the neighbouring countries of Syria with massive financial aid.?

He said migrants from Lebanon, Jordan and Turkey should ?return to where they came from?, before adding: ?These people do not flee from danger.?

?They did not come to Europe because they are looking for security, but they want a better life? The living conditions in Greece, Macedonia, Serbia, Hungary and Austria do not appeal to them.?

On Friday, Mr Orban warned that tougher immigration laws will take effect in Hungary from 15 September.

He said that migrants entering Hungary in their thousands in the past weeks had ?rebelled? against his police force, and order had to be restored.

There have been tensions between authorities and migrants across Hungary, as thousands try to pass through en route from Greece to countries in northern and western Europe.

In the past few days, aid workers have spoken of ?abysmal? conditions for refugees at a camp in Roszke on the Hungarian-Serbian border.

Hungary has insisted it is trying to fulfil its obligations as an EU member and register all new arrivals.

But its attempts to control the flow of migrants ? such as building a fence along its border with Serbia and staging border protection exercises ? have proved controversial.

NPC calls for the prioritization of Reproductive rights and choices