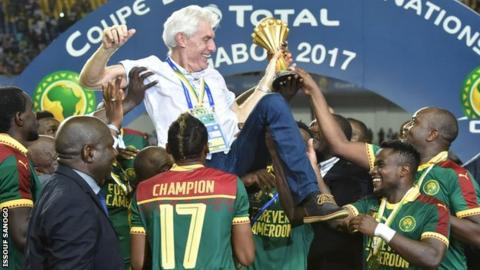 Head coach of Cameroon, Hugo Broos has said, he bears no grudge against anyone, despite leading the Indomitable Lions to their fifth trophy in the 2017 Africa Cup of Nations in Gabon. Coach Broos, was heavily criticized by the media, before the start of the competition after dropping experienced players and replaced them with young ones.

According to the coach, “it will be unwise on his part to bear grudge against anyone, after doing the most important thing by winning the cup.

“I don’t think it is necessary to think of vengeance against any body in Cameroon. I came to do a job and I am happy at the end of the end of the day, we won the trophy.” He stated.

According to coach Broos said, his decision to drop experienced players from the team was because, some of them were old, whilst others were not motivated to play for the nation.

“And you have all seen the results, we have won the nations cup and the people of Cameroon are happy. It is a good foundation to build on and from here we shall look at what the future holds for us.” He noted.

Coach Broos, was always at cross roads with the media in Cameroon following his decision to introduce young players into the national team.

“We were physically better than Egypt” – Cameroon coach reveals