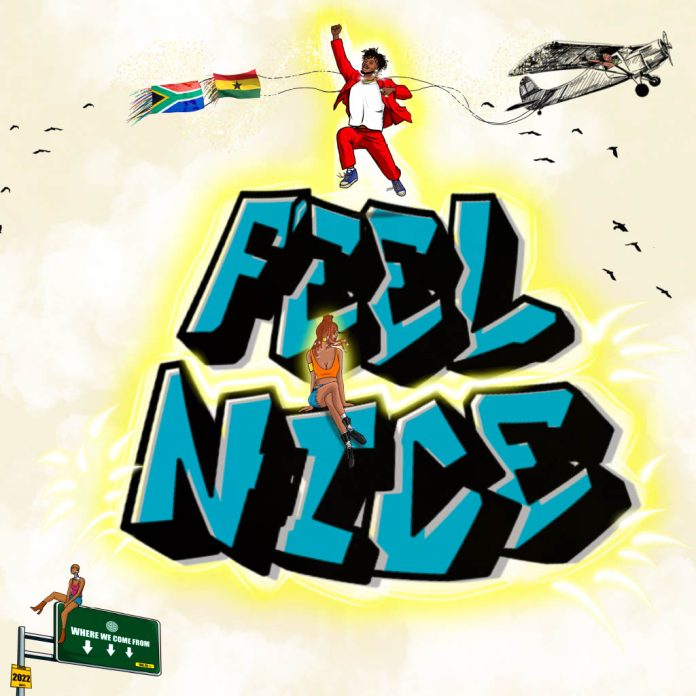 “You attract the energy that you give off. Spread good vibes. Think positively. Enjoy life like I enjoyed making this music.” Kuami says.

Kuami Eugene’s ‘I Feel Nice’ is a celebration of the explosion of African music into mainstream airwaves. EMPIRE is the top label in Nigeria and this compilation project is a body of work that’s set to highlight the rising talent from their ever-growing roster on the continent. The first single from the project, ‘Cough,’ by Kizz Daniel dropped on 10/14 and is currently #2 on the Global Shazam chart.

“What inspired the song is the vibe that we all have when we’re in the studio together. And I was thinking about how close it’s getting to Christmas and Holiday times, how excited they will be. I was also thinking about how nice I would want people to feel when they listen to this music. So I was in a nice mood myself, and I think that’s actually what helps with the vibe when creating I Feel Nice. The song is ultimately about how people need to forget their troubles in life and focus on the fun part for a while.” says Kuami.

The album was created during the writing camp at EMPIRE’s headquarters in San Francisco directly following their first showcase “The New Africa” during the second night of SXSW. During the writing camp, the crowd saw performances by BNXN FKA Buju, Cheque, Fireboy DML, June Freedom, L.A.X. Wande Coal, and other trailblazers signed to the label. Artists set to be spotlighted on the upcoming project include Fireboy DML, Olamide, BXNX fka BUJU, Black Sherif, Kizz Daniel, L.A.X, and more.

“The energy that each record brings is infectious, magical, and I can’t wait for the world to hear Where We Come From.” says Tina Davis, EMPIRE SVP A&R

EMPIRE globalized their existing success in America by further highlighting the accomplishments of Nigerian artists like Fireboy DML, Olamide and Asake. Named as the top label in Nigeria after only one year of its creation, EMPIRE holds the title by market share and as the top music company with the most collective No. 1’s in Nigeria by TurnTable Charts, the Billboard equivalent in Africa. Furthermore, artists across EMPIRE’s roster dominate the Top 35 songs on Apple Music’s ‘Nigeria Top Songs’ chart and held the #1 Top Single for over 17 weeks on TurnTable Charts. The artist division has seen much success with Fireboy DML becoming the first African artist to perform at the 2022 BET Awards, Kizz Daniel breaking records as most streamed artist on Boomplay, KiDi going platinum in India with touch it featuring multi-platinum recording artist Tyga, and Black Sheriff gaining 75+ million audio streams for “Kwaku the Traveller” in just one month.

“Africa is rich with some of the most talented creatives in the world. This compilation reflects EMPIRE’s continued commitment to Community and Culture. This body of work is the epitome of unity, community, and culture. I look forward to the world’s continued embrace of African culture.” says Sak Pase, EMPIRE VP A&R

Kuami Eugene is a fast-rising Ghanaian highlife, afrobeats, and afro-pop singer. He started off as a contestant on the MTN Hitmaker, a talent show in Ghana that gives a platform to upcoming artists to showcase their musical talents. After a string of hit songs such as ‘Single,’ ‘Boom Bang Bang,’ and ‘Confusion,’ Kuami picked up the ‘Best new Artiste of The Year ‘and ‘Highlife Artist of The Year’ at the Vodafone Ghana Music Awards in 2018.. In 2019 he picked up ‘Producer of The Year,’ ‘Highlife Artist of The Year,’ and ‘Album of The Year’ for his debut album RockStar. He has finally crowned ‘Artist of the Year’ in 202 at the Vodafone Ghana Music Awards. He released his second studio album Son Of Africa.

Founded in 2010 by Bay Area native Ghazi Shami, EMPIRE is currently leading through its innovative approach to the digital music era across its label, distribution, and publishing arms. Ghazi has been recognized for his work in Billboard’s 2021 Indie Power Players list, Billboard’s 2021 R&B/Hip-Hop Power Players, as well as Billboard’s 2022 Power List. With its focus on early-stage artist development, the San Francisco-based company has been instrumental in launching the careers of multi-platinum, Grammy Award-winning Anderson. Paak, BLEU, Key Glock, Young Dolph, XXXTENACION, KingVon, and more.

Through crafting bespoke deals that are always in favor of the artist, EMPIRE is able to form a true partnership with each artist and label on its roster. Coupled with EMPIRE’s unique software for analytics, recoupment, and royalties, which is available to every partner, the company offers a level of transparency unprecedented in the music industry.